A stunning outcrop is visible from Malgonera along the CAI path Nr. 762, at an altitude of approx. 1700 metres above sea-level - a block of calcareous, thinly-layered strata of the Livinallongo Formation, covered by a stunning sequence of pillow lava, several hundred metres high. The outcrop highlights the relationship between volcanic activity and sedimentation. 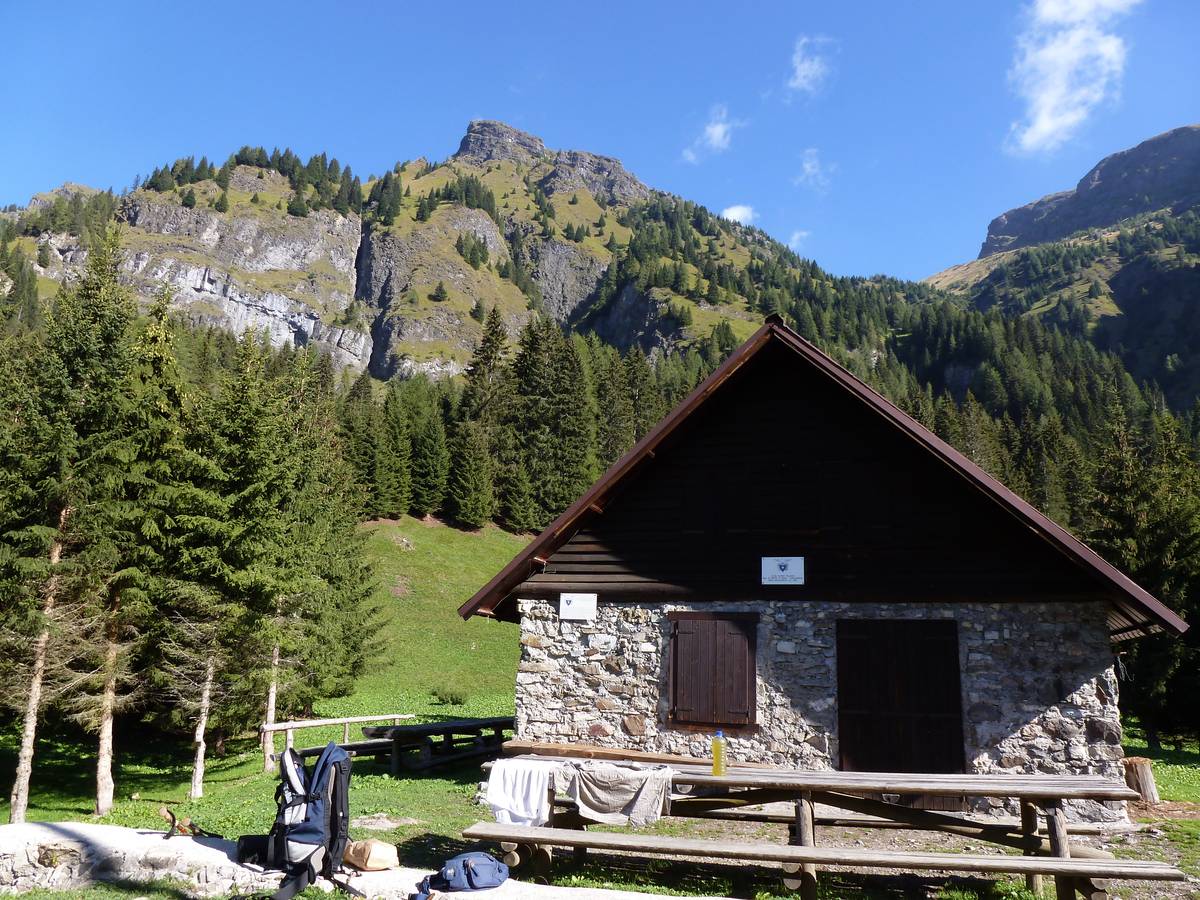 Malga Malgonera with the cushion lava wall in the background. Above Monte Caoz carved in the Monte Fernazza Formation

Pillow lava is typical of magma pouring into underwater environments. Because of the high temperature amplitude between the water and the lava, the latter solidifies in a very short timespan, resulting in the formation of a thin glassy crust. Fresh lava continues to accumulate behind the crust and, as the pressure increases, causes a rupture in the crust with more magma outpouring into the water, solidifying rapidly and thus perpetuating the process. The magma flow causes the continuous overlapping of rounded blocks whose core remains soft; they continue to deform and solidify until they grow completely cold. Malgonera’s pillow lava is the result of tireless magmatic underwater activity and its sequence is the strongest in the Dolomites.

There is an outcrop of a large vein within the Livinallongo Formation, at the foot of the mountain wall; it is composed of basic rocks (andesite-basaltic) and is characterised by a visible columnar jointing.

Such lavas are the result of their thermal contraction during the cooling process, especially when such cooling happens under weak rocky covering.
The area also offers the opportunity to discover various minerals: calcite, chalcedony, analcime and quartz.

Continuing along the path after a few hundred meters we reach Malga Malgonera (1581 metres above sea level), renovated by CAI Chapter of Ponte di Piave-Salgareda. This spot reveals a stunning view towards Pale di San Martino with the escarpment of Pale del Balcon, covered by the volcanic rocks from Sass Negher and Campo Boaro. Looking out towards north from Malga, we can see the outcrop of pillow lavas in its entirety; at the top we can see the Monte Fernazza Formation with its grassy ledge; at the very top is located the Marmolada Conglomerate with its sturdy rocky frame. 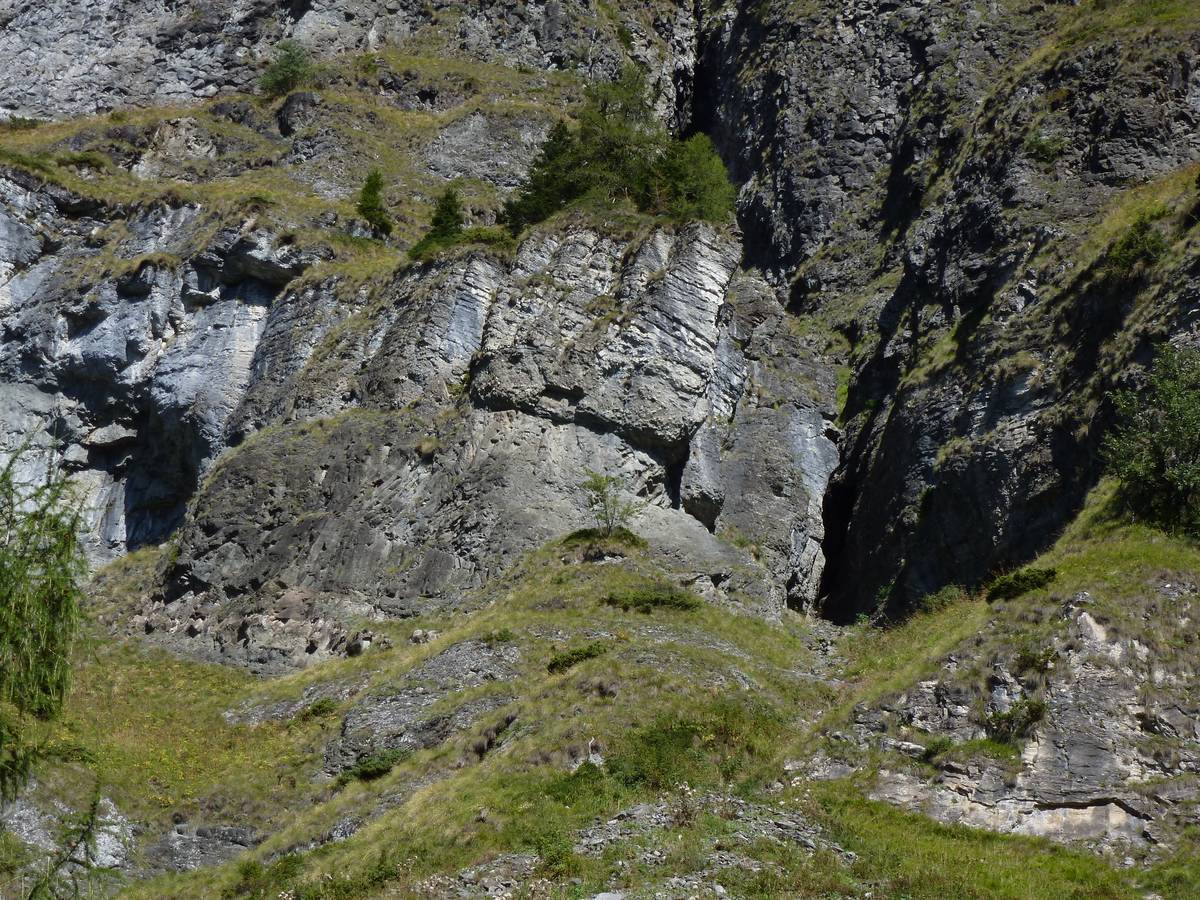 Pillow lava, typical of magmatic effusions in an underwater environment, cover the calcareous layers of the Livinallongo Formation, inside which there are layers of basalt-like with their typical columnar fracturing (photo DG). 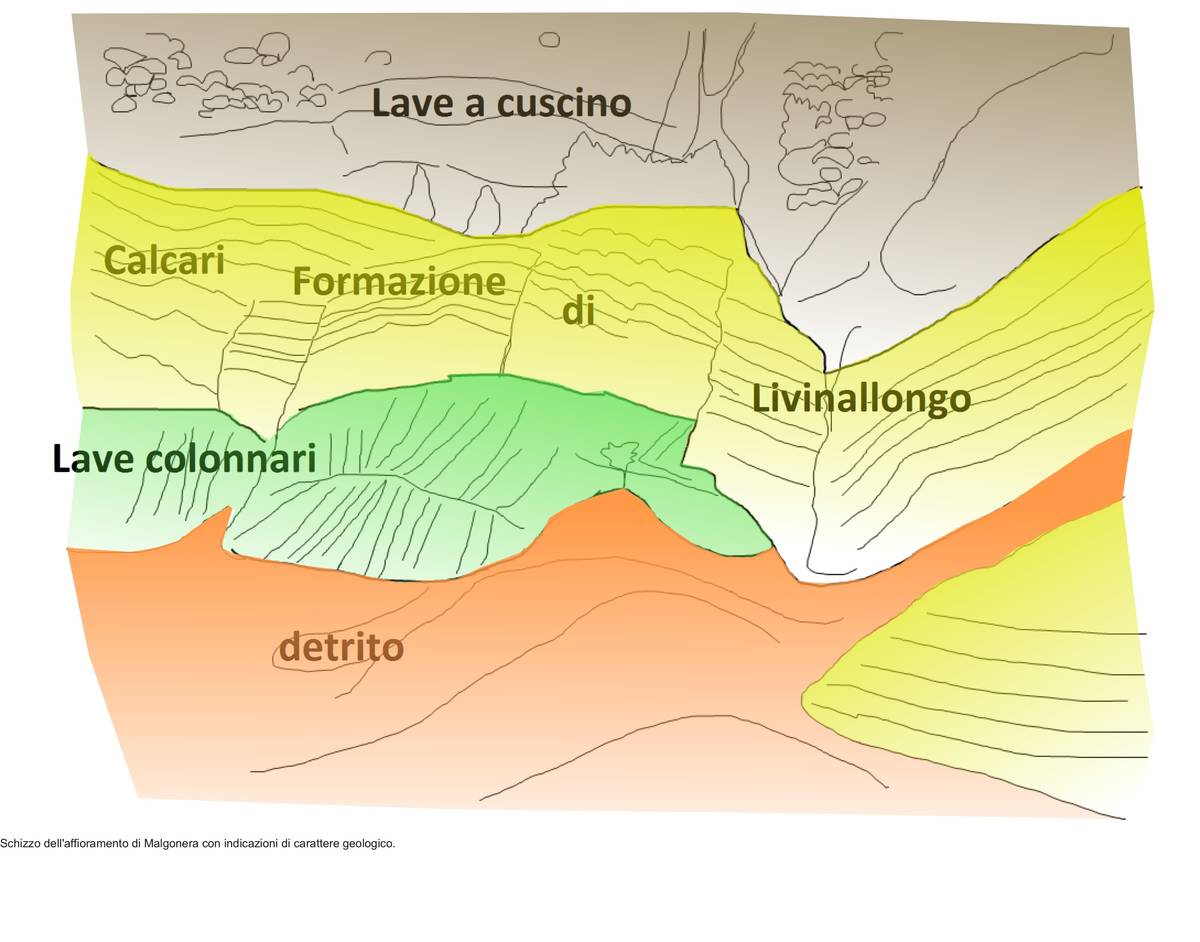 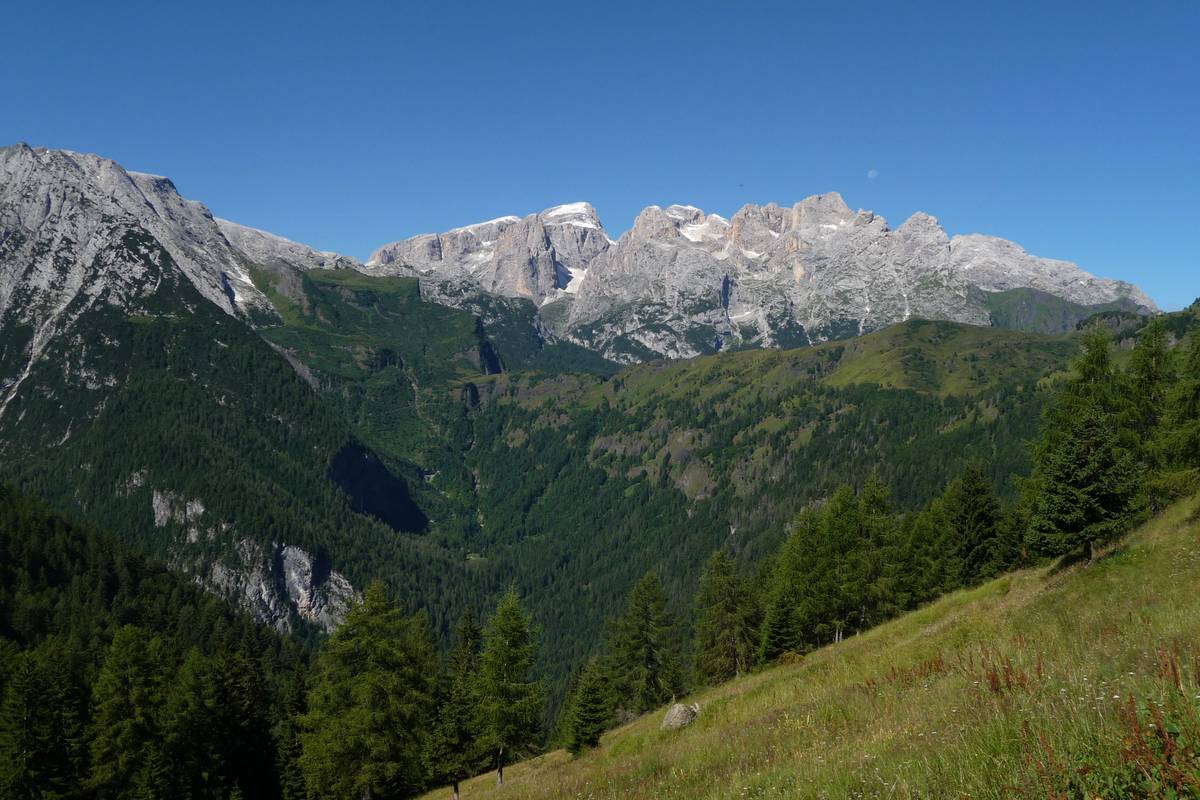 A view from Casera Gardès to Val di Reiane - a hanging glacial valley located right along the contact between the cliff escarpment of Pale del Balcon (left) in the Schlern Formation, and the volcanic and volcano-clastic rocks of Sass Negher with the crest of Cesurette-Palalada-Caoz; the Livinallongo Formation outcropping along the valley floor. After the retreat of the glaciers, landslides and streams created escarpments, ledges, waterfalls, gullies and small ravines, by operating in a mixed and complex rocky substrate. In the background the northern chain of the Pala-Group with Cima Vezzana, Cima dei Bureloni, Focobon, Cima di Campido and Monte Mulaz (photo DG).