INFORMATION
Opening hours: the exterior of the Villa is free access

The building has formed one imposing coherent whole since the seventeenth century; due to its subsequent expansions, and especially with the addition of stables and staterooms, it increasingly took on the semblance of a villa. We owe the wall structures to the family Crotta while de Manzoni, who acquired the property in 1813.

The elaborate mythological and allegorical sculptural cycles embellish both the exterior and the interior and are visible for the passersby. The statues, in the local dialect lovingly referred to as Grota's "kids " and "deaf", are positioned in the private garden of the villa, as well as at the garden's gate overlooking Agordo's main square.

Fifteen Greek deities and other mythological figures, either alone or in pairs, flank on both sides the inner court of the garden which was built towards the end of the eighteenth century to connect the main building with the orthogonal body used as stateroom. This is the exact spot where we can find one better-preserved figure, tucked away in a corner, that hoists an enormous boulder on his back. In a way, the statue symbolises the long path of the dolomite which this travel guide aims to follow; it could also be an allusion to the mining business of the villa's owners. The statue stands for Sisyphus' labours who was condemned to forever push a boulder uphill, and that once reached the top of the mountain would inevitably roll down again. There are also the figures of Vulcan, Aristides, Flora, Apollo, Diana, Bacchus and Ariadne, Saturn, Jupiter, Meleager, Amphitrite, Hercules, a character in seventeenth-century apparel, as well as that of a shepherd.

The fifteen mascarons together with the twenty-nine smaller masks perched between the upper arches made of a different, not easily recognisable material.

On the other hand, we know with certainty that the internal statues are made of dolomite - which naturally didn't bear that name at the time of their sculpting - because we know not only the source of the material used, but also the authors of the works. A document dated June 16, 1692, and preserved in the Fund Da Giau, an archive kept in the local town library, records the procurement of stones suitable for the sculpting of figures, by the local stonemasons.

The description corresponds to the eighteen statues dominating the villa's inner court with measurements in compliance with the original order. They are statues of deities, often present in old gardens, as well as philosophers preferred by the commissioners as guardians that would banish in the past acts of violence concerning the offspring of Francesco Crotta concerning the fratricide of Giovanni Antonio slain by assassins hired by his brother Giuseppe. 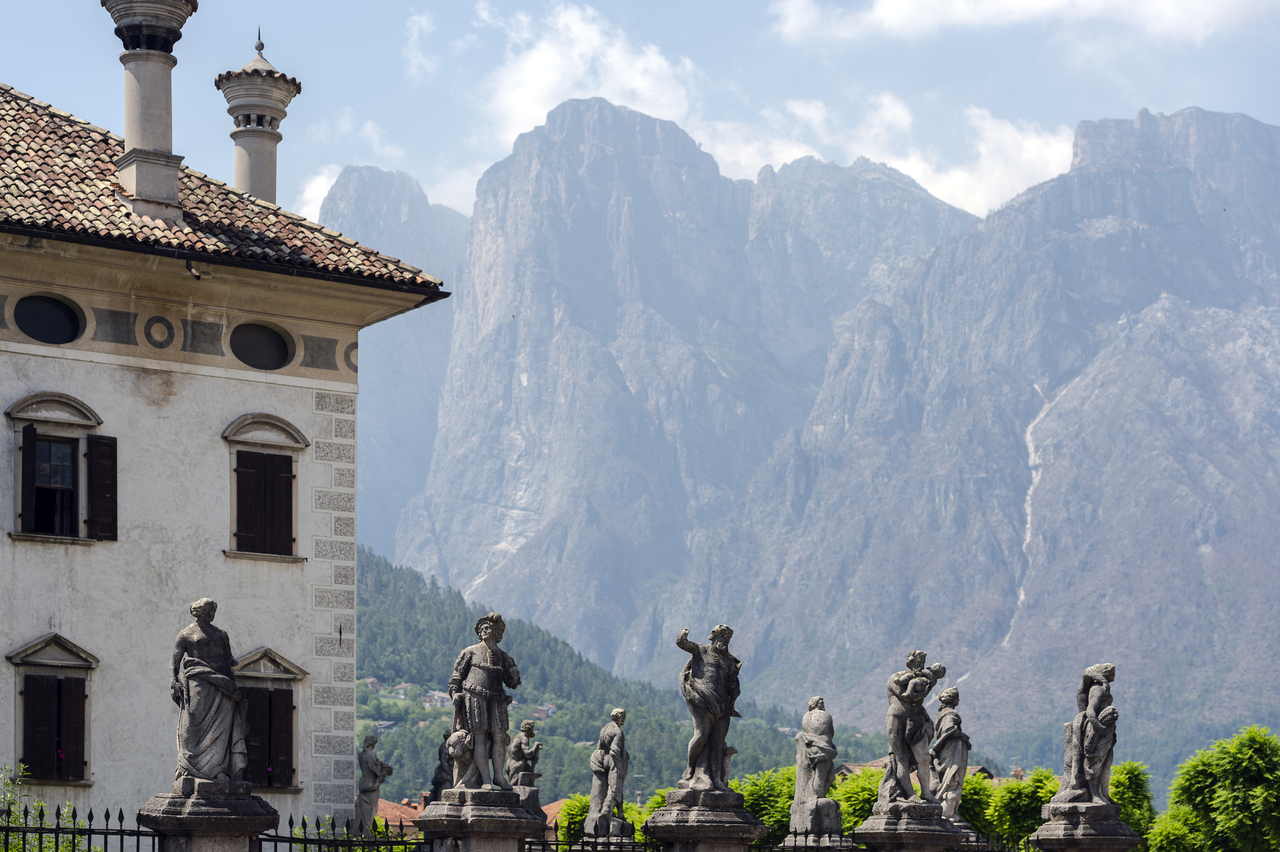 The inn Gasthof zum Stern is located in the centre of Oetz. Driving on the A12 Inntal motorway, take the exit Haiming - Ötztal and proceed on the B186 (main road) until the exit Sautens. The inn is within a short walking distance from Ötztal Tourist Information office in Oetz down the village street and then proceeding on Kirchweg.

The listed inn "Gasthof zum Stern" is located in the center of the municipality Oetz, at the entrance of the valley of the same name. The late Gothic inn is a traditional Tyrolean inn with a central floor layout, regular facade composition and vibrant facade painting. The northern gabled facade has a widely bevelled lancet arch with a pentagonal central oriel window perched on top of it. The figural depictions on this side of the facade represent not only references to local culture but also counter reformatory oriented scenes from the Old Testament. The facade paintings were made possible by the application of plaster over the masonry with a binder made of burned dolomite. Plasters and mortars are classic examples of the use of dolomite rock in Tyrol in the past as a raw material for binder production.

The north side of the "Gasthaus zum Stern" inn embellished with numerous wall paintings.

The inn's west side.