There is a long outcrop of the Werfen Formation along the Bordina creek composed of a substantial block of layers which, in and of itself, is characterised by similar features (calcareous-marl rocks, silty-arenaceous, thinly-layered and thus easily erodible). If we took a closer look at the lithological composition and its sedimentological characteristics, however, we will notice continuous evolution. This variability has prodded the geologists into dividing the Formation into nine members in order to identify in each of them higher homogeneity (a member is a lithostratigraphic unit which is inferior in the hierarchy compared to a formation).

The rocky layers belonging to the Werfen Formation are the result of a long period of sedimentation in a coastal marine environment, mainly within the tidal range. The interaction of several factors (subsidence, sedimentation and sea level fluctuations) produced environmental changes that persisted throughout the Early Triassic (252 to 247 million years ago). The widespread sea swell prints in the silty-arenaceous rocks of the Campil Member and in the calcarenites in Cencenighe Member, speak of beach environments; the same testimony is brought to us by the presence of gastropods and oolitic sands in the Oolite Member, similar to those on the beaches of the Bahamas. The marly limestones rich in bivalves of the genus Claraia present in  the Siusi Member, on the other hand, suggest that the shoals of the tidal plains were subject to the influence of the sea swell from time to time. The Val Badia Member with its rich paleontological references (bivalves, gastropods of the Natiria genus as well as ammonites of the Tirolite genus) denotes somewhat deeper marine environments well below the sea swell. There are outcrops only of the formation's most recent members in the Valley of San Lucano.

The erosion created by the storm Vaia has exposed a series of marly-silty arenaceous layers on the lower part of the stream Bordina's left bank. They are  predominantly red and belong to the Campil Member, revealing the classic sedimentary structures of ripple and tempestite so typical of environments with a dominant swell. 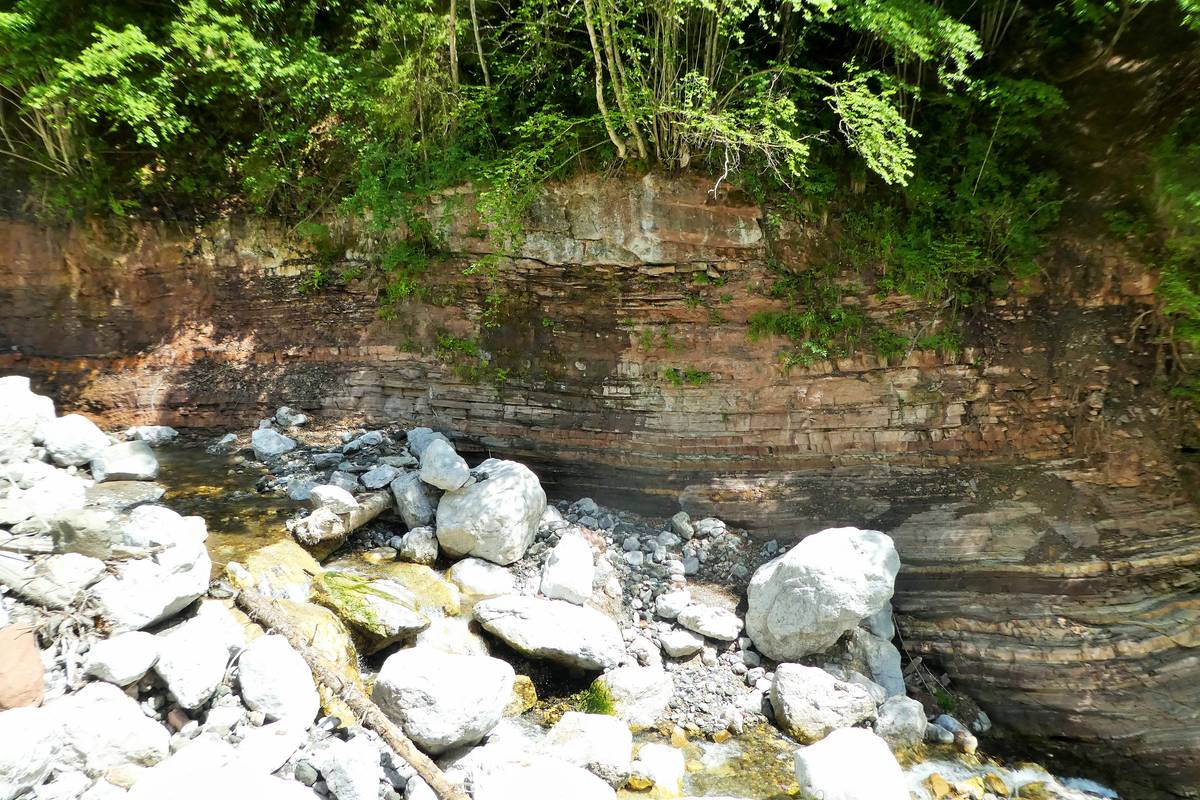 The grey-coloured strata of the Val Badia Member outcropping a little further up on left bank. The Val Badia Member is a typical representative of subtidal environments below the fluctuation of the sea tide. The  features of this area, however, indicate a transition to less deep peritidal environments; these are bioturbated marly dolomites alternating with motley siltstones. Limestones and grey malty-silty dolomitic limestones can be found in the upper part.

The following Cencenighe member is 70 to 80 metres thick; it is composed of dolomites and yellow and red oolithic-bioclastic limestones with crossing lamination layers. The layers are assumed to be deposits produced by the coastal strip through the tide's power. Siltstones and bioturbated grey marls from subtital environments alternate with siltstones and red argillite. The desiccation cracks, or mud cracks, found in the latter suggest that they were formed in an inter-supratidal environment.

The formation ends with the member of San Lucano. It is 40 to 60 metres thick and is composed of decimetric red sandstones layers with horizontal and crossed lamination, wave and current ripple; siltstones, argillites, motley silty-marly dolomites (yellow, grey, red, violet) with ripples and mud-cracks structures which are typical of areas subject to high and low tide. The terrigenous fraction diminishes in its mid-high section to be replaced by light grey, bioturbated dolomites, alternating with multicoloured siltstones.

At the foot of the first high waterfall along the stream, there is an outcropping of a lower Schlern Dolomite composed of whitish or light grey microcrystalline dolomites in layers from 10 to 60 cm; clearly this is a peritidal carbonate platform deposit with its distinctive plane-parallel joints.

The Voltago Conglomerate replaces the Schlern Dolomite. The Voltago Conglomerate is an alluvial fan deposit formed by eroded debris coming from an emerged area further south. Being far of its place of origin and close to the sea, the conglomerate is almost entirely composed of arenaceous layers.  A conglomerate layer, several decimetres thick, is jutting through the reddish sandstone layers just before the waterfall.  Vertical fractures intertwine beneath the sandstone strata. Their surface is covered by tectonic strange structures called “feathered structures” because of their similarity with feathers.  Such structures develop on the fractures' surface indicating the direction of the propagation of energy which occurs towards the exterior of the "feather". The energy radiates obliquely in relation to the fault plane during the fault's movement.

Cascata dell’Inferno (Hell's Watefall) is a typical example of selective erosion; the tough calcarenitic slab (Calcareniti di Listolade) of the Agordo Formation protrudes vertically as compared with the soft silty-arenaceous stones of the lower part of the Agordo Formation and of the Voltago Conglomerate. The internal part of these layers often abound in plant residues (mainly conifers and ferns).

On the right side of the edge, the slab is disrupted by a fault which had lowered the western part of the rocky block (left), compared to the one in the east (right). 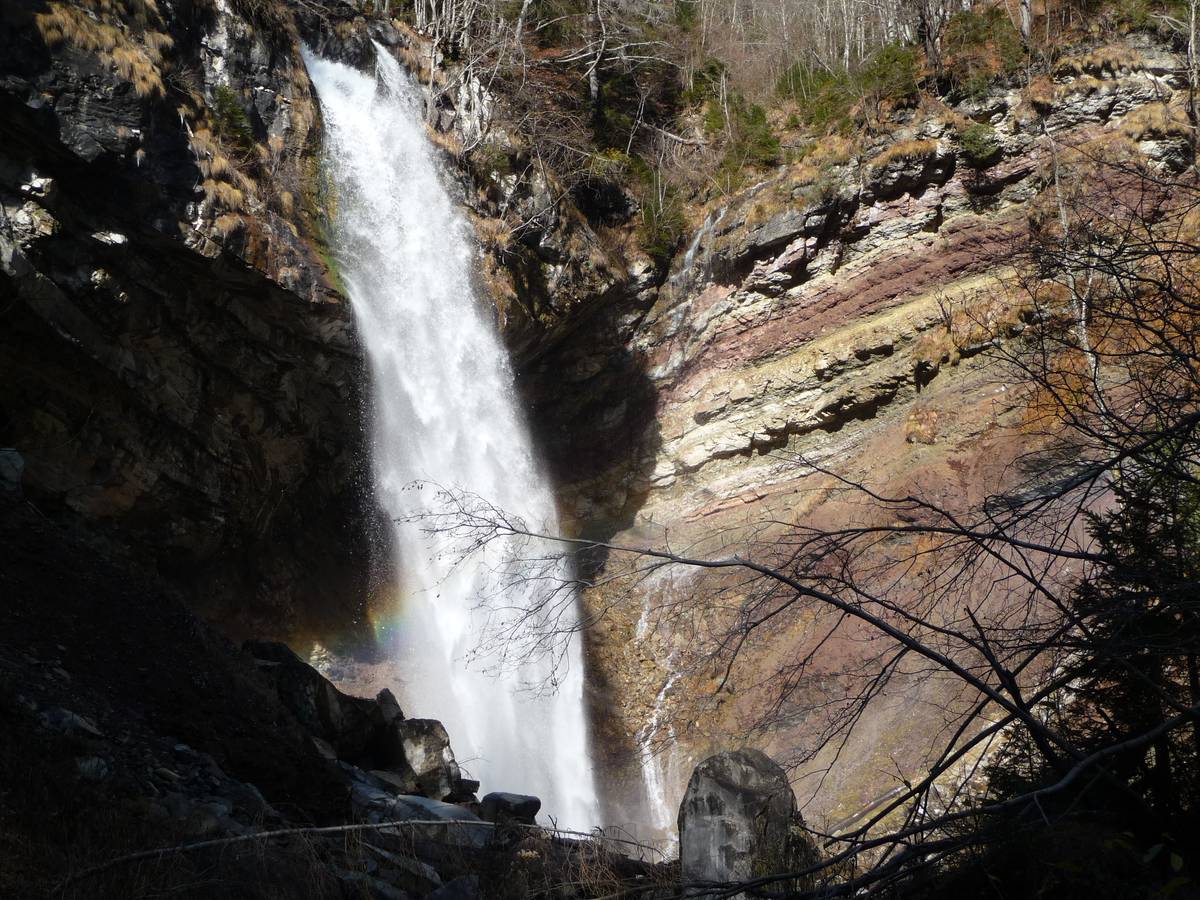 Cascata dell'Inferno and the motley layers of the Voltago Conglomerate (photo DG). 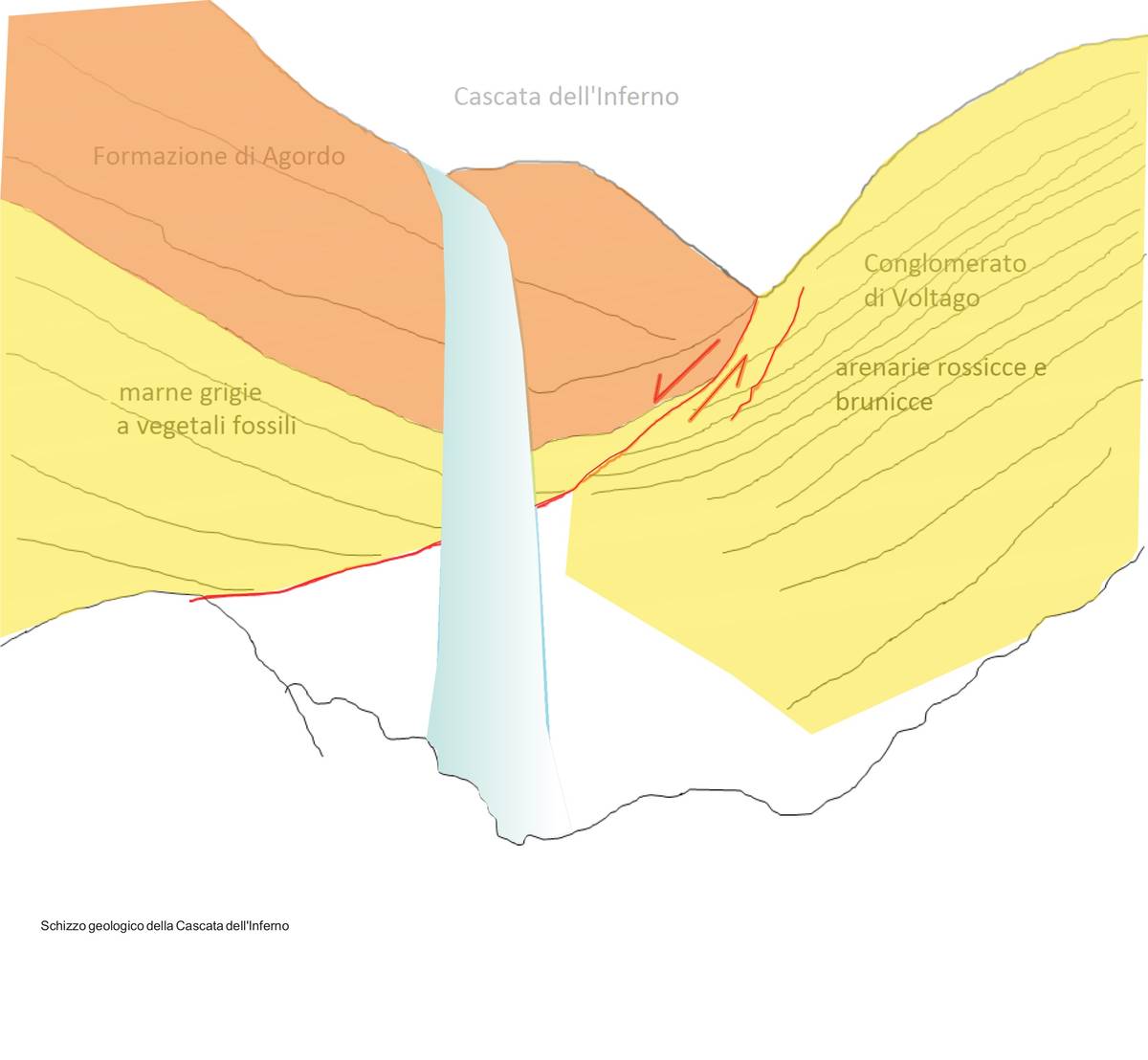 Geological sketch of the area of the Cascata dell'Inferno (ill. DG). 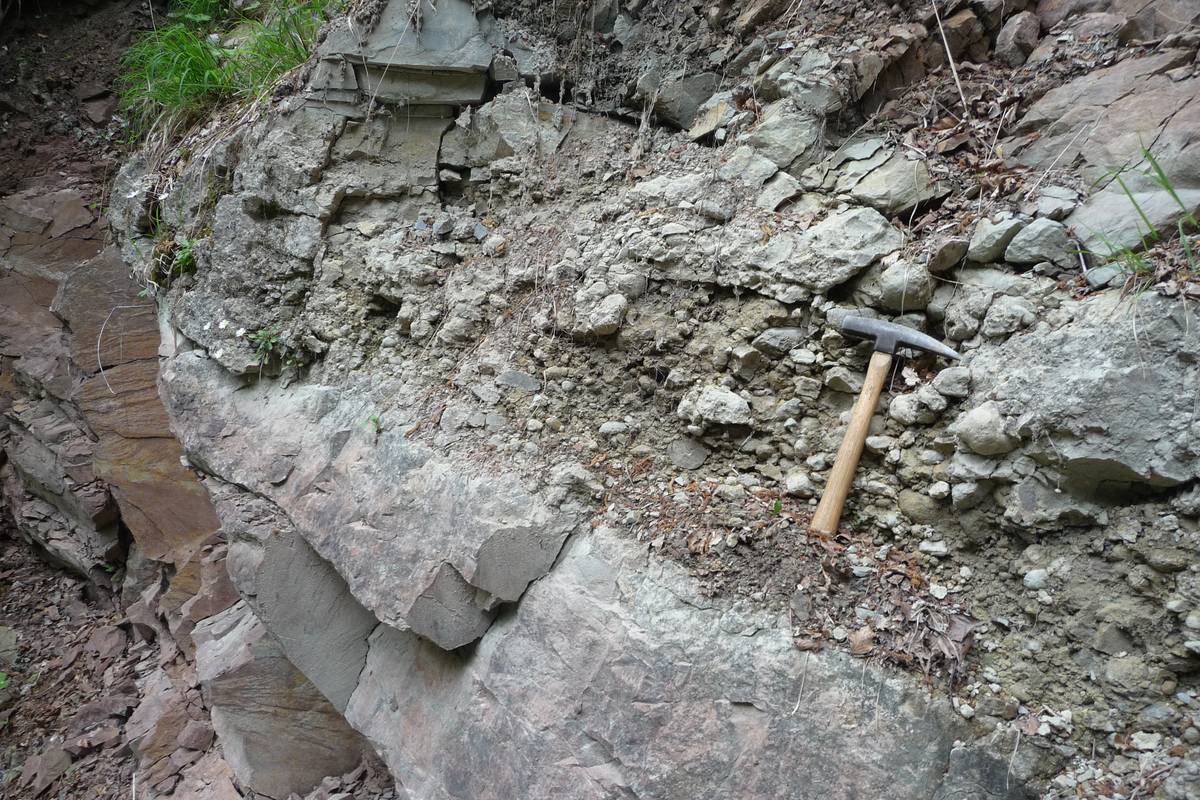 A layer belonging to the Voltago Conglomerate Formation (photo DG). 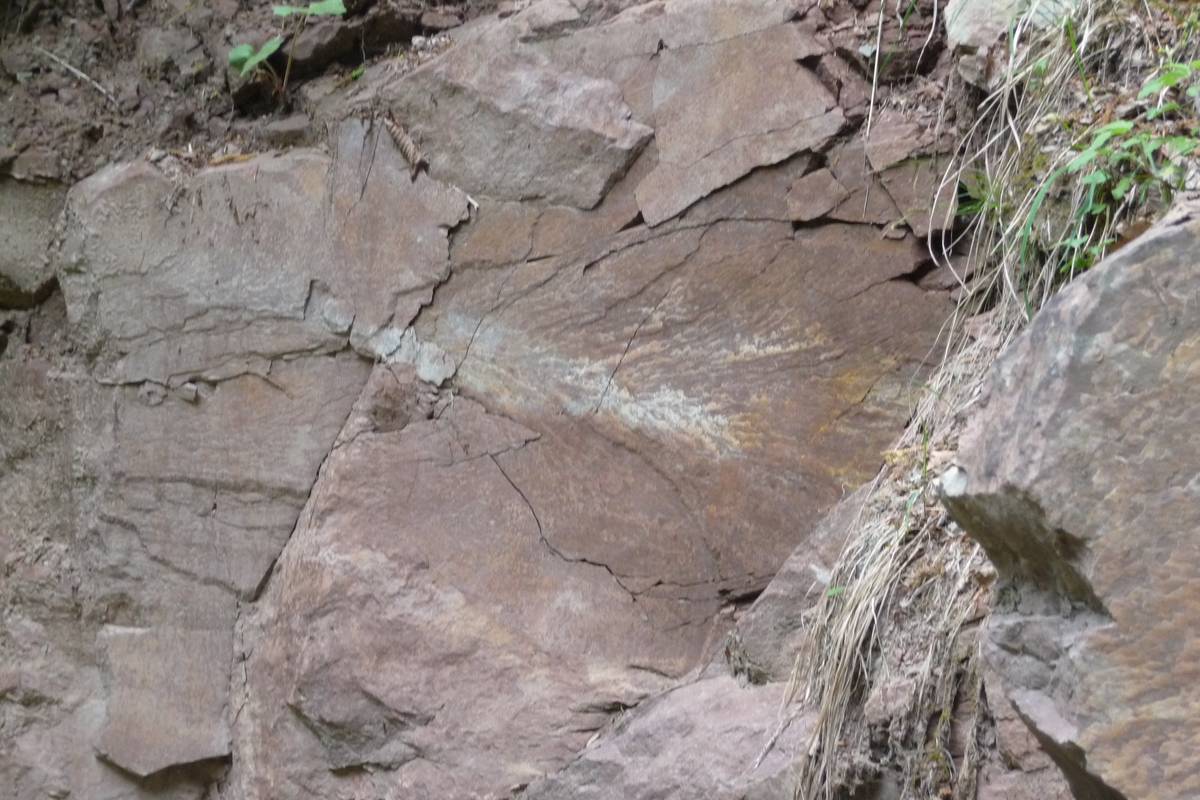 “Feathered” structure that crosses a sandstone layer of the Voltago Conglomerate. This is a typical tectoglyph, a tectonic indicator, showing the direction in which the energy released by the fault propagates (in this case from left to right) along the lateral fractures that develop during the activation of the fault itself (photo DG).