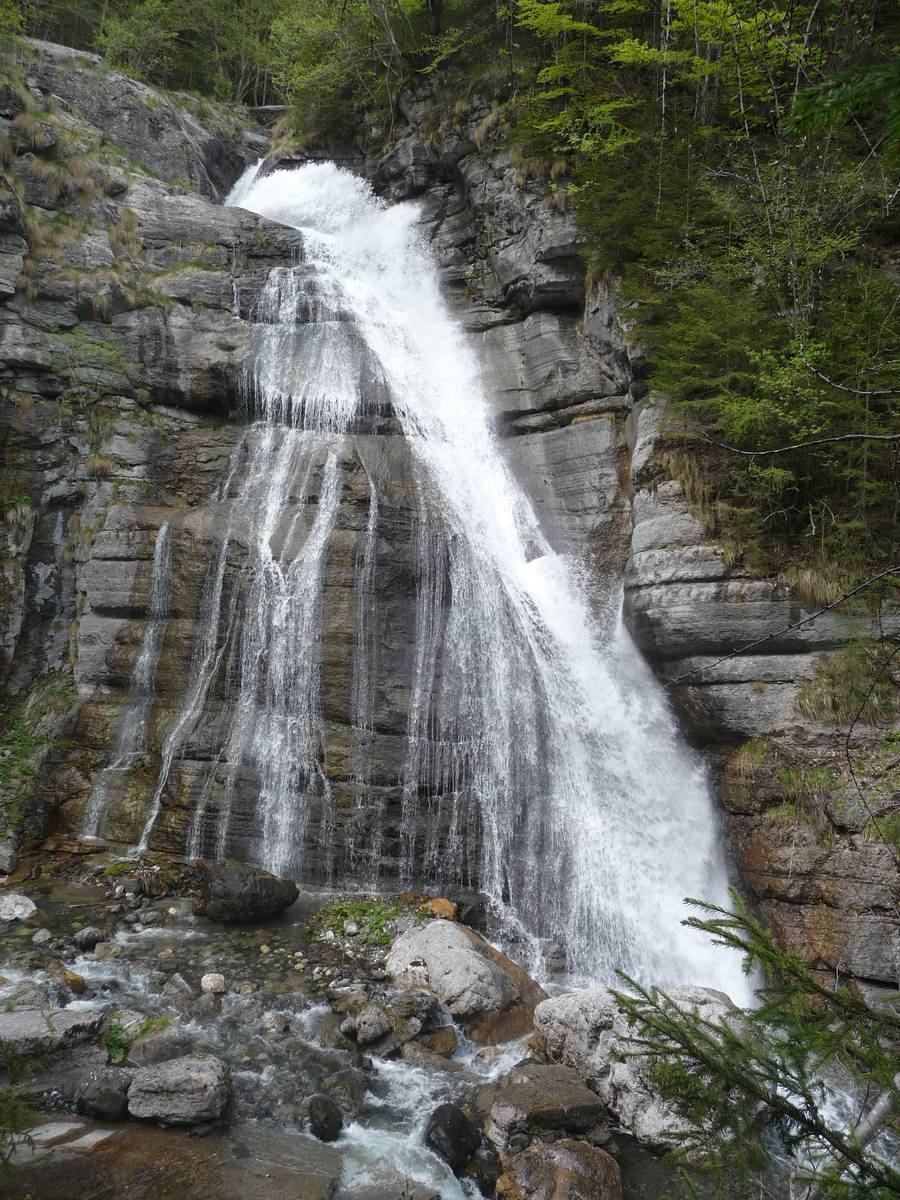 On the cut surface of a rock in one of these disused quarries one can recognise in detail the Moena Formation. Here the formation is a filling of a small intra-platform basin enclosed by active escarpments and connected to syn-sedimentary faults from the Late Anisian. It is characterised by two lithological types: carbonate breccia and dark limestones. The dark limestones are frequently laminated in tabular layers of thickness from 2 to 10 cm, alternating with marly interlayers several centimetres thick. The preservation of a perfect lamination proves the anoxic nature of the sedimentation environment and therefore hostile to limivorous organisms that usually mix the sediment of the seabed.

The breccia are formed by heterometric clasts ranging from a few centimetres to approximately half a meter of basin and platform origin. The former are larger in size and formed by tabular shreds of laminate facies; the latter originate from the Contrin platform and are smaller and more rotunds. The breccia were formed as a result of submarine flows which, descending along the sliding embankment, incorporated the sediments of basin origin. 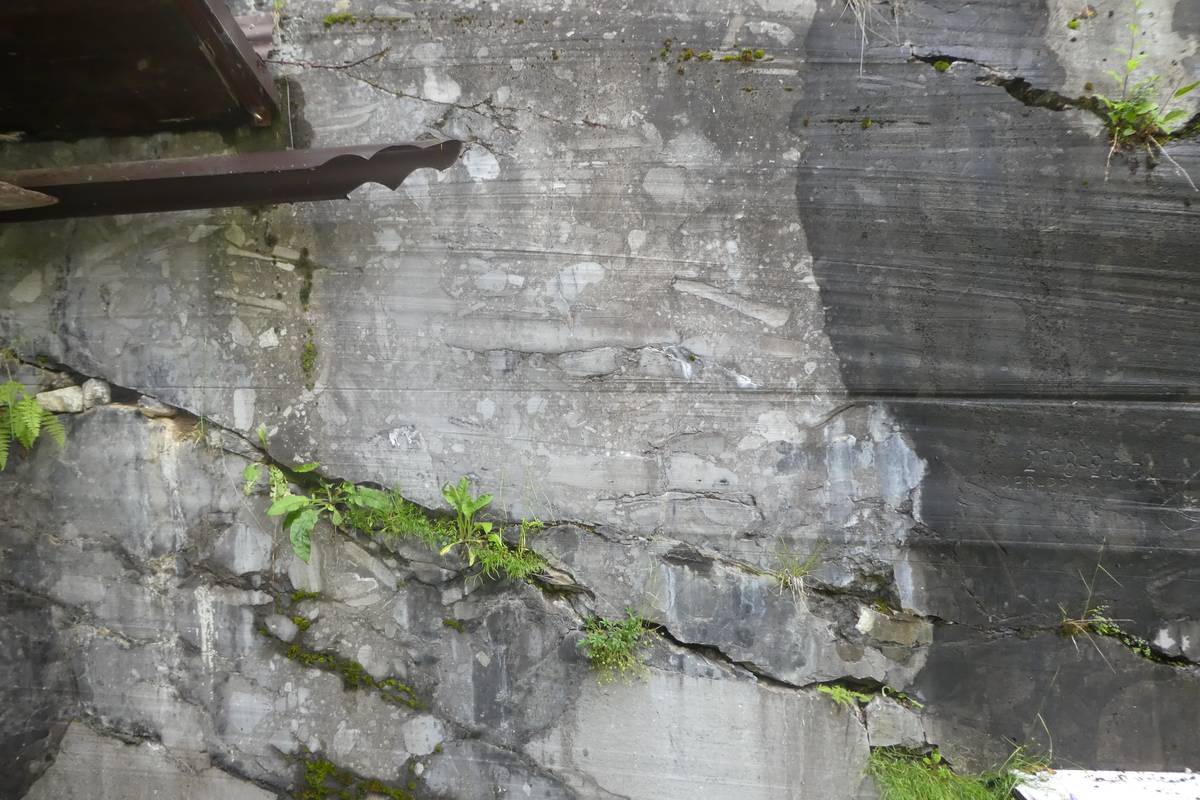 A detail on the wall where the rocky structure can be identified (Moena Formation) composed of dark tabular fragments (laminites of the Moena Formation) and more rounded light fragments (Contrin Formation) immersed in a dark matrix rich in bituminous substances (photo DG).

History of the Stone Quarries in Pont

Deposits of black marble are not very common in Italy, especially those more than 50 cm thick. There is uniformly coloured black bituminous limestone outcropping in the surroundings of Pont whose layers reach a thickness of several meters. Since the early 1900s the outcrop attracted the attention of local entrepreneurs who deemed the stone a great business opportunity.

A local entrepreneur made the first tentative step in opening a quarry here in 1910. Two major problems arose from the very start - the need for an access road and the poor quality of the first extracted stone samples.

Prior to WWI, many fortifications together with several military roads were built in the Belluno area and Agordino. One of these works is the military from Col di Prà leading to Rifugio Rosetta across the plateau of Pale di San Martino and passing right through Pont.

Even though one of the problems was thus solved and the new tests gave better results, in the years that followed the end of the First World War did not see any commercial exploitation of the quarries.

The mining activity commenced in the 1930s which coincided with the autarchic period of our country. Since good quality black marble was quite scarce in Italy, most of the country's supplies thereof were usually imported from Belgium where black marble is of clearly superior quality and, most of all, uniformly coloured.

In that period, the national production of black marble was concentrated on five different sites - Colonnata in the Apuan Alps, Varenna and Albino in Lombardy, Roverè di Velo near Verona, and Carso in Friuli. Compared to its Belgian counterpart, all marble from the above-mentioned sources lacked not only in uniformity in colour, but also contained inclusions or white veining which considerably diminished its value.

The black "marble" of Pont was compact, devoid of white veining and occurred in layers more than 60 cm thick - a feature that rendered it valuable for a variety of applications.

Work at the quarry commenced on May 18, 1935 after a local entrepreneur perceived its business potential .

The quarry was sold to SAMB (Società Anonima Marmi Bellunesi) on March 30, 1938 which continued mining throughout WWII. The quarried material remained unsold and more than 150 blocks of "marble" were piled up and kept on the squares and along the street. The cutting facility was modernised toward the end of the war by the introduction of the penetration pulley of Monticolo, but shortly after quarrying stopped.

Mining resumed sporadically in 1960 - the period was marked by frequent change of management and the quarrying was disrupted often until its final disuse in 1968. 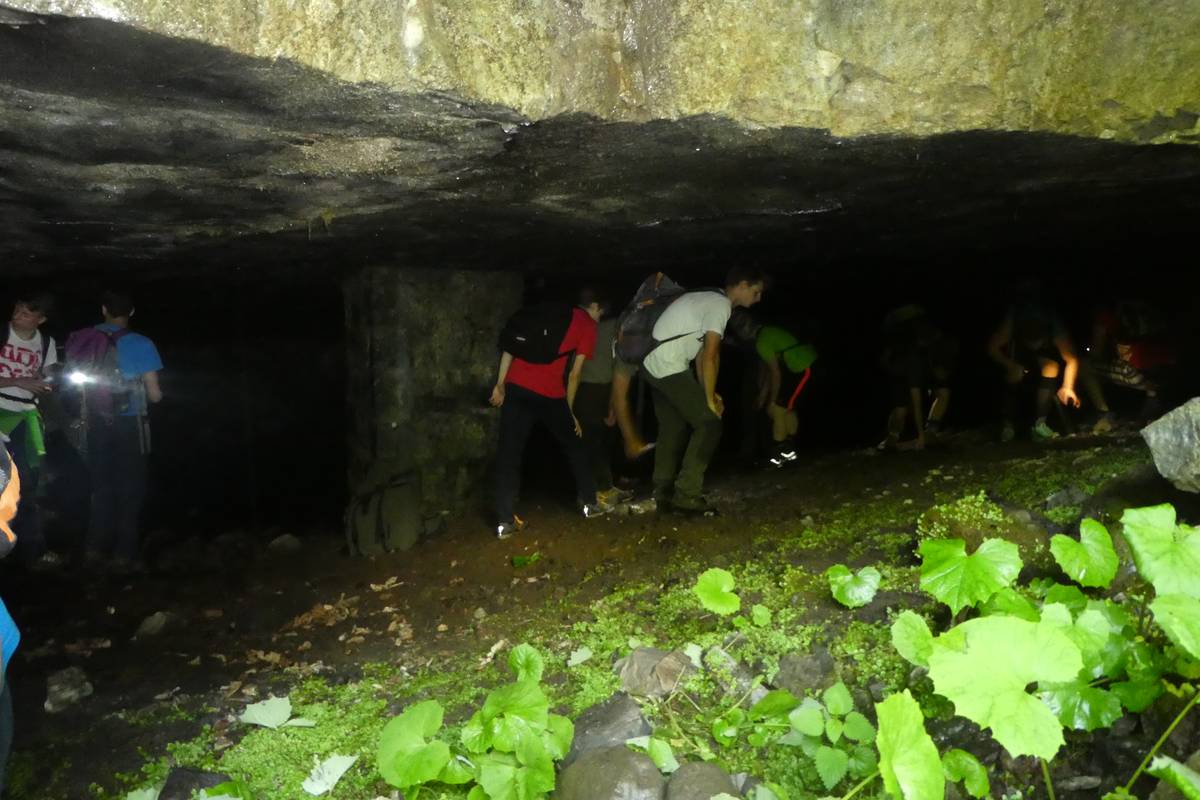 Students of the Institute “U. Follador ” in one of the underground quarries from which the so-called Black Marble of Taibon was quarried (photo DG). 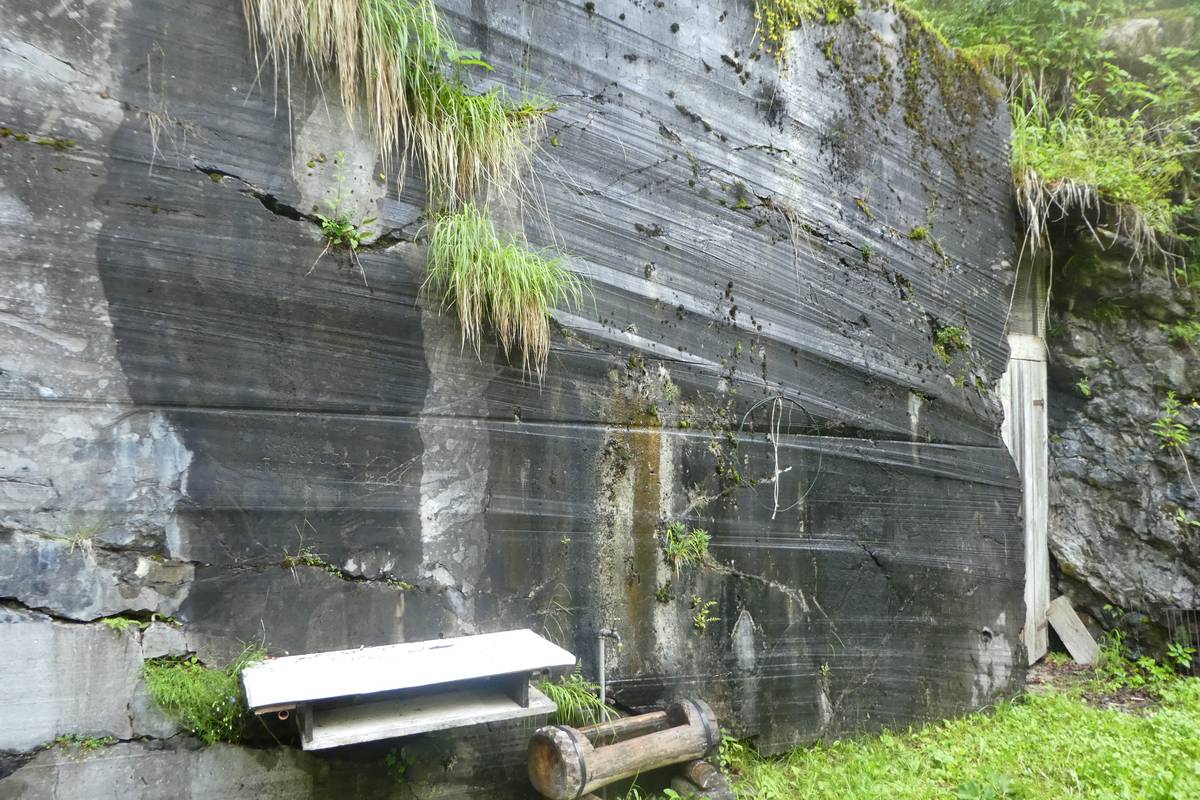 Wall in one of the quarries where cutting traces left by rotating wire are clearly visible (photo DG). 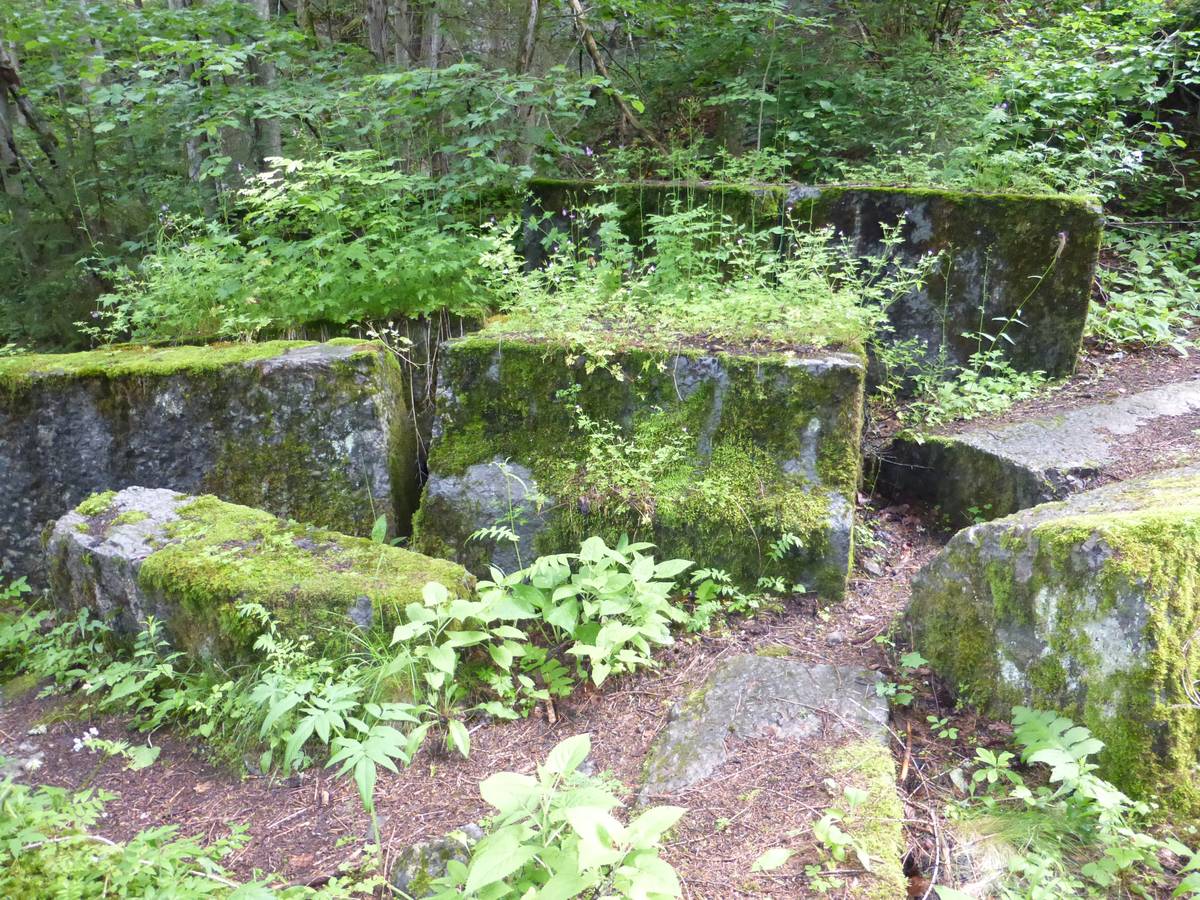 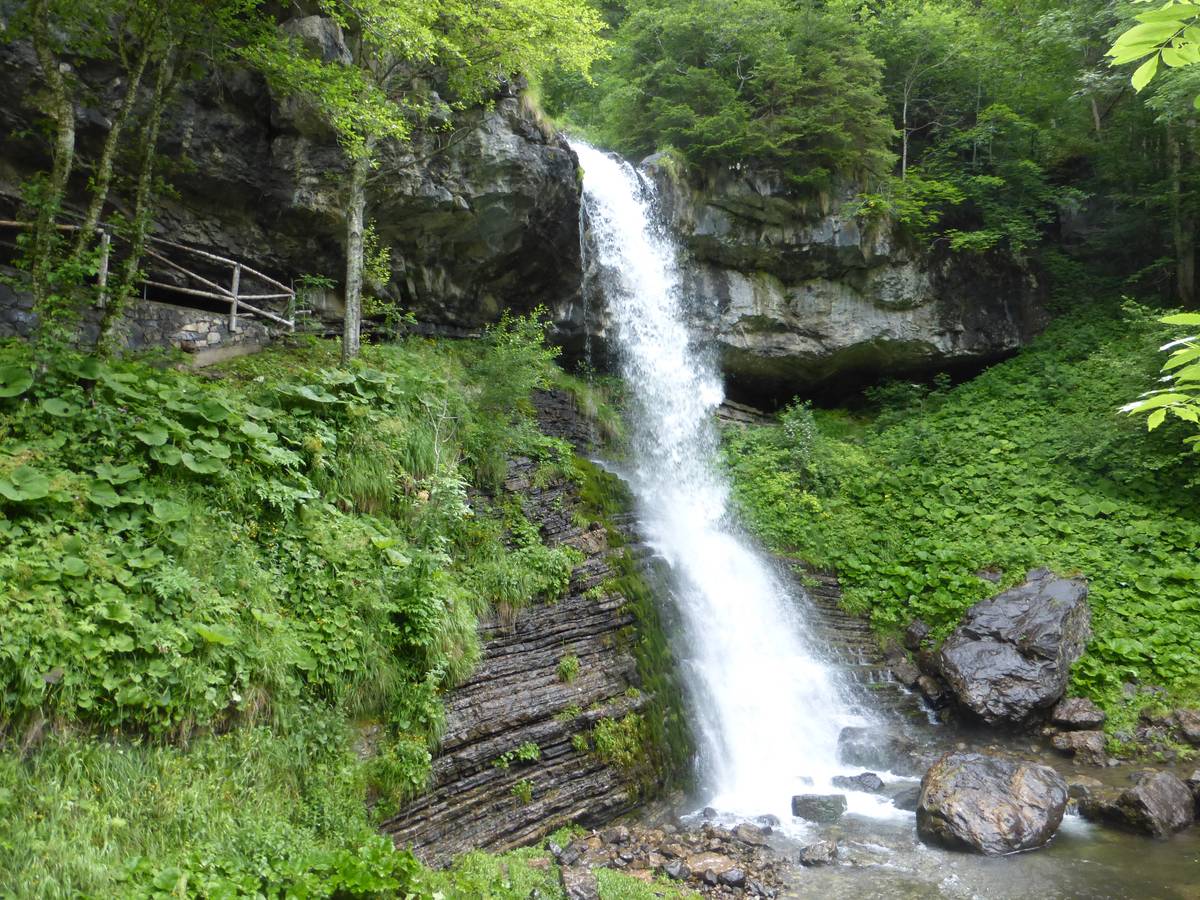 The high waterfall in Pont: the robust ledge of breccia belonging to the Moena Formation juts through the more tender laminites below (photo Vittorio Fenti).

Several outcrops of dark coloured clayey-sandy silts have been identified in Pont; often there were occurrences of Dropstones -pebbles that have been brought by icebergs which drop through the normally finer lake sedimentary deposits, as soon as the ice melts. Based on field research, it is assumed that these are lake sediments deposited in an ice-contact lake, which was created in the early phase of the Würmian glaciers retreat.

The lake was apparently created once the main glacier in Val d'Angheràz-Valle di San Lucano had retreated considerably with in relation to its maximum expansion; it was located at an altitude of approx. 1200 metres, preventing the regular water flow from the Bordina valley. The local glacier is less fed and more prone to ablation because if its southern orientation. In this place it had detached from the main glacier and retreated into Val Reiane and Val Gardés. 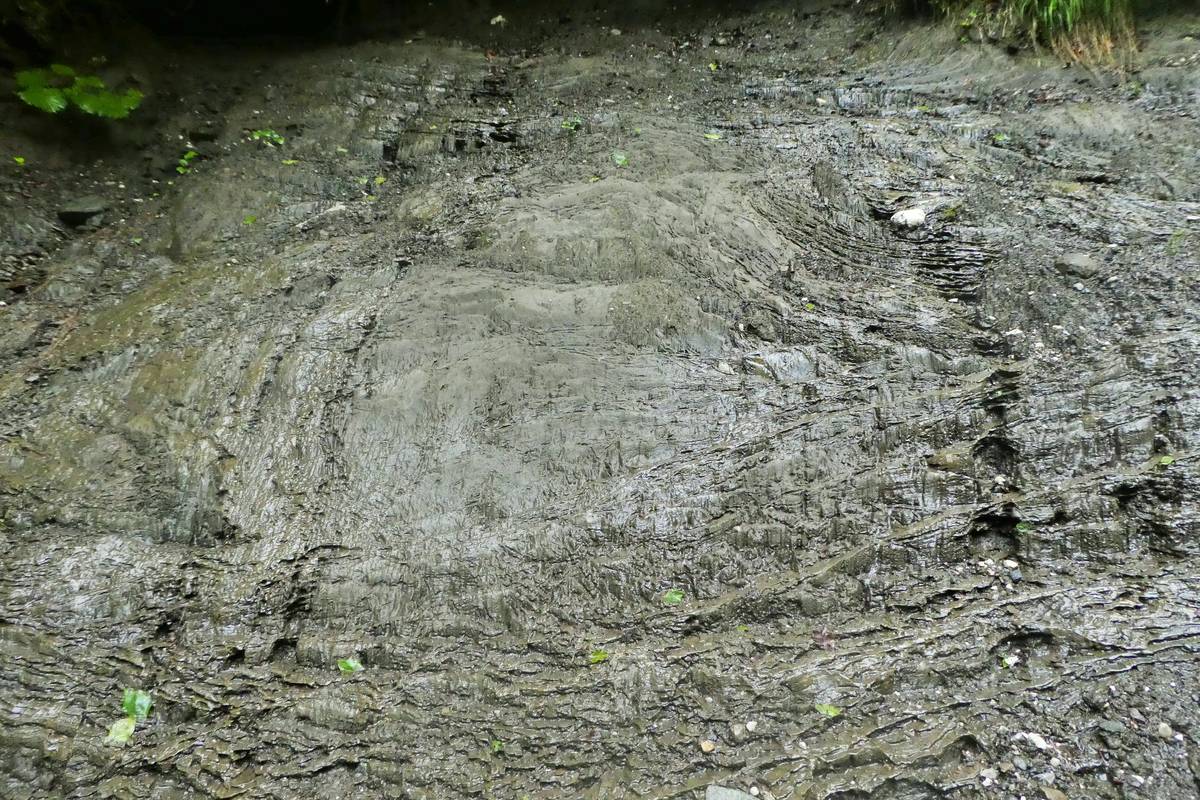 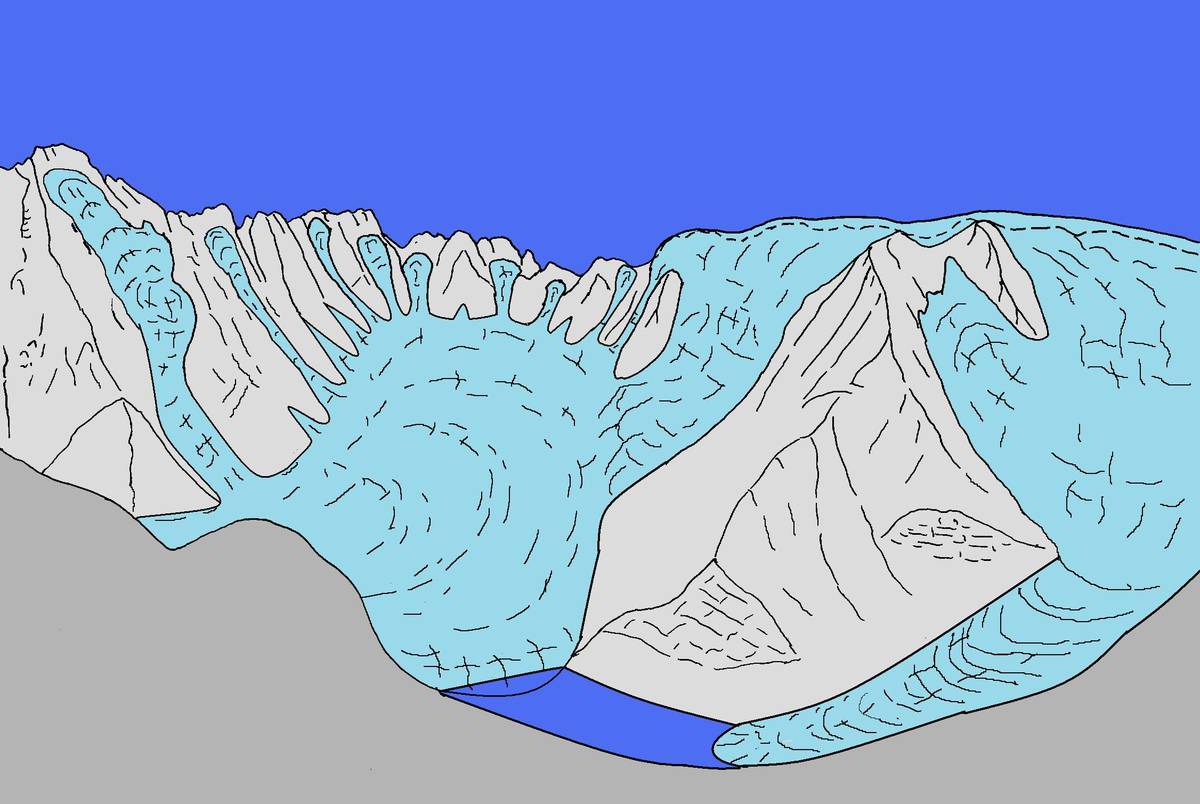 Hypothetical reconstruction of the ice-contact lake in Pont which originated thanks to the obstruction of Val Reiane by the main glacier of San Lucano (ill. DG). 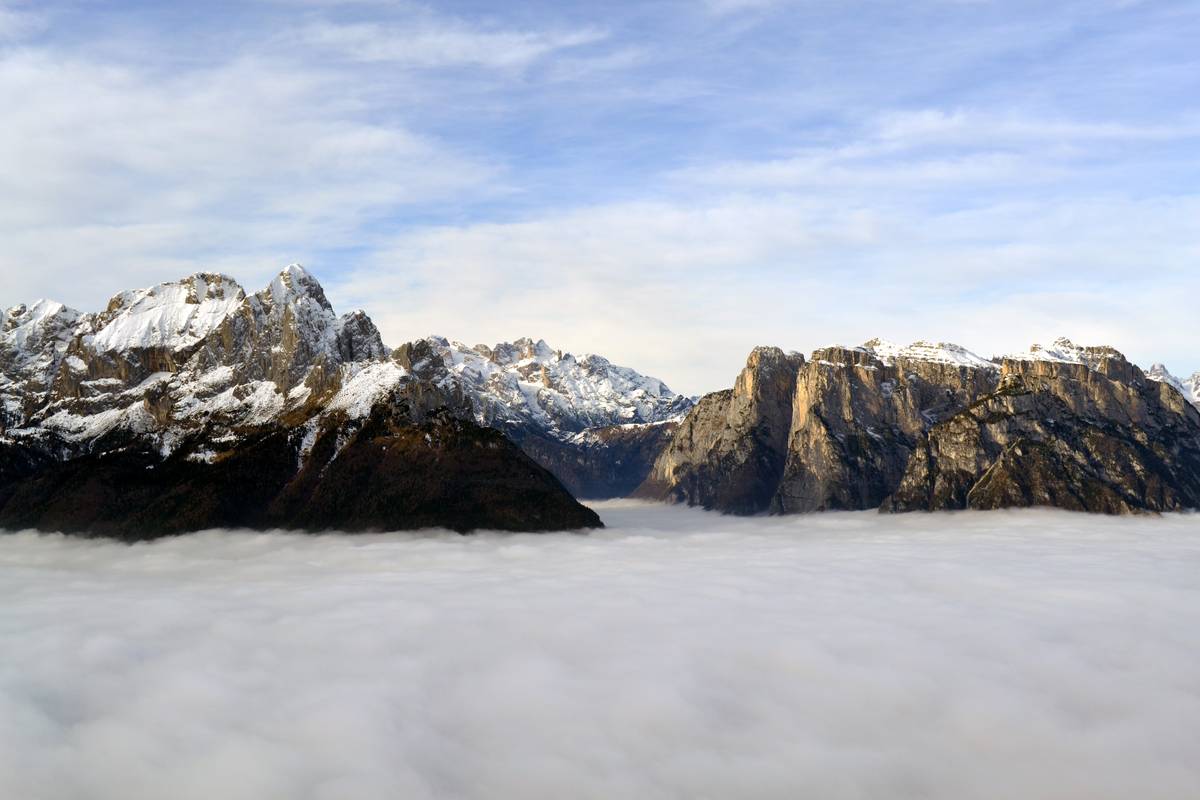 Slithering clouds through the San Lucano Valley help us imagine the glaciers' origin when the ice-contact lake in Pont was formed (photo Corrado Cattadori).

The hamlet of Pont was damaged by the storm Vaia as the stream Bordina overflew from its riverbed, destroying a part of the military road and revealing layers of Morbiac Limestones in its wake. Take the military road back up to the hairpin bend; here we can see a fine example of concentric folds developed in the laminites of the Moena Formation. 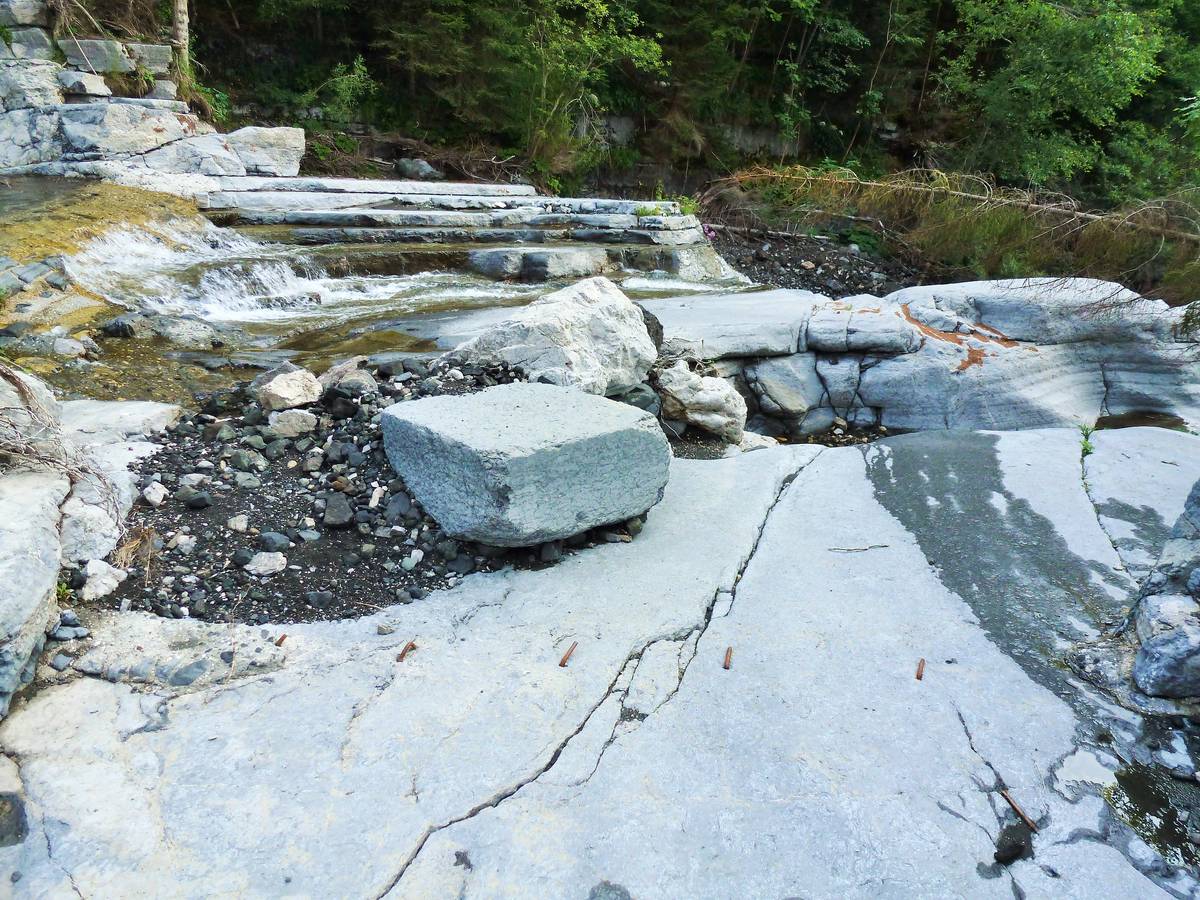 Layers of Morbiac Limestones uncovered by the erosion due to the storm Vaia; the unfinished "black marble" block is visible (photo DG).