The vista from this spot enables us to grasp the geometric parameters between several formations, namely the Contrin carbonate platform of the Anisian together with its adjacent Morbiac Limestone with its typical lagoon environment, and the Ladinian escarpment from the Schlern Formation which protrudes on the attached marine basin in the Livinallongo Formation.

At the beginning of the Mesozoic era between 252 and 247 million years ago, the Dolomites were a flat and homogenous coastal area; the Anisian period brought significant environmental fragmentations due to tectonics and sea level fluctuations.

A series of step-like synsedimendary faults of what would later be known as the Valley of San Lucano, which occurred at the same time as the sedimentation itself, led to the sinking of the western area. This resulted in the formation of anoxic conditions in the Moena Formation, compared to the eastern part where the carbonate platform of the Contrin Formation was deposited. The faults are easily recognised thanks to the activity of the selective erosion carried out by the waterways, which is always more effective along the fractured rocks.

Due to the rise of the sea level during the Ladinian, the Conrin platform failed to adapt to the new conditions and ceased to be active; this led to the creation of purely marine environments which spread all over the Dolomites. Communities of calcium carbonate-fixing organisms such as bacteria, algae, sponges and corals, managed to take root only on some of the more shallow areas.

These platforms were formed during intense subsidence conditions and increased rapidly both vertically and laterally and ended up covering the basin's deposits of the Livinallongo Formation.

The progradation of the clinostratifications is obvious beneath the Quarta Pala, whereas the wedge of layers of the Livinallongo Formation becomes thicker as they shift further away from the platform's core located in the Seconda Pala.

Further up on the wall of the Seconda and Terza Pala, there is a slightly concave oblique line, a narrow ledge set in the presence of a thin level of ash. This horizon is ubiquitous in the Dolomites and bears witness of a particularly violent volcanic eruption which impacted an area that emerged south of the Dolomites during the Late Ladinian. 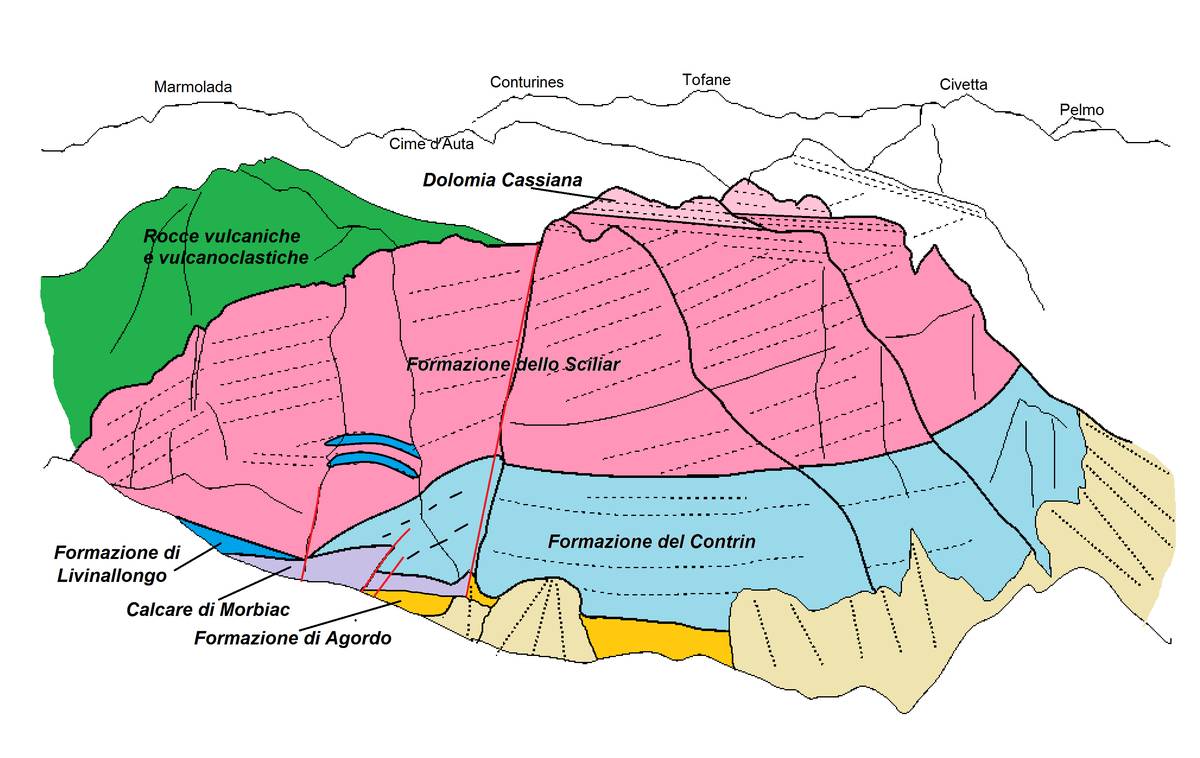 Geological sketch of the Pala-Group of San Lucano  (ill. D.G.).

A rocky arch known as Arco del Bersanel can be seen from the top of Boral di Lagunàz, to the right of the mountain pass (better seen if using binoculars); in the past it was reachable through the now abandoned Ferrata Miola.

On a large ledge located in the lower part of Boral di Lagunàz, there exists a beech forest. This practically inaccessible strip of forest became desirable for the local population at the end of the 1800s. At that time the San Lucano Valley was almost completely devoid of trees; the beech trees in particular were used for the production of charcoal used first in the smelting furnaces of Col di Prà and then in the copper mines of Valle Imperina. To take advantage of this resource, the villagers built a real via ferrata with metal anchors plunged and fixed in the rock. Wooden stairs were attached which enabled the woodcutters to reach the ledge and perform their work.

Two large and valuable outcrops can be seen while going a dozen of metres further up the trail. The first one below is the outcrop of the Cencenighe Member in the Werfen Formation; its colour and densely stratified fractured appearance are rightfully denoted as Crepe Rosse (Italian for red cracks).

The second is located further up and delineates the transition from the lower Schlern Dolomite (layered and grey), and the Agordo Formation (yellowish grey).

The plinth of Mount Agnèr's North Edge (Spigolo Nord) composed of the Contrin Formation is recognisable above; to the east it borders Van di Mez and Vanet del Piz in the west - both a re deep ravines running along transcurrent vertical faults. 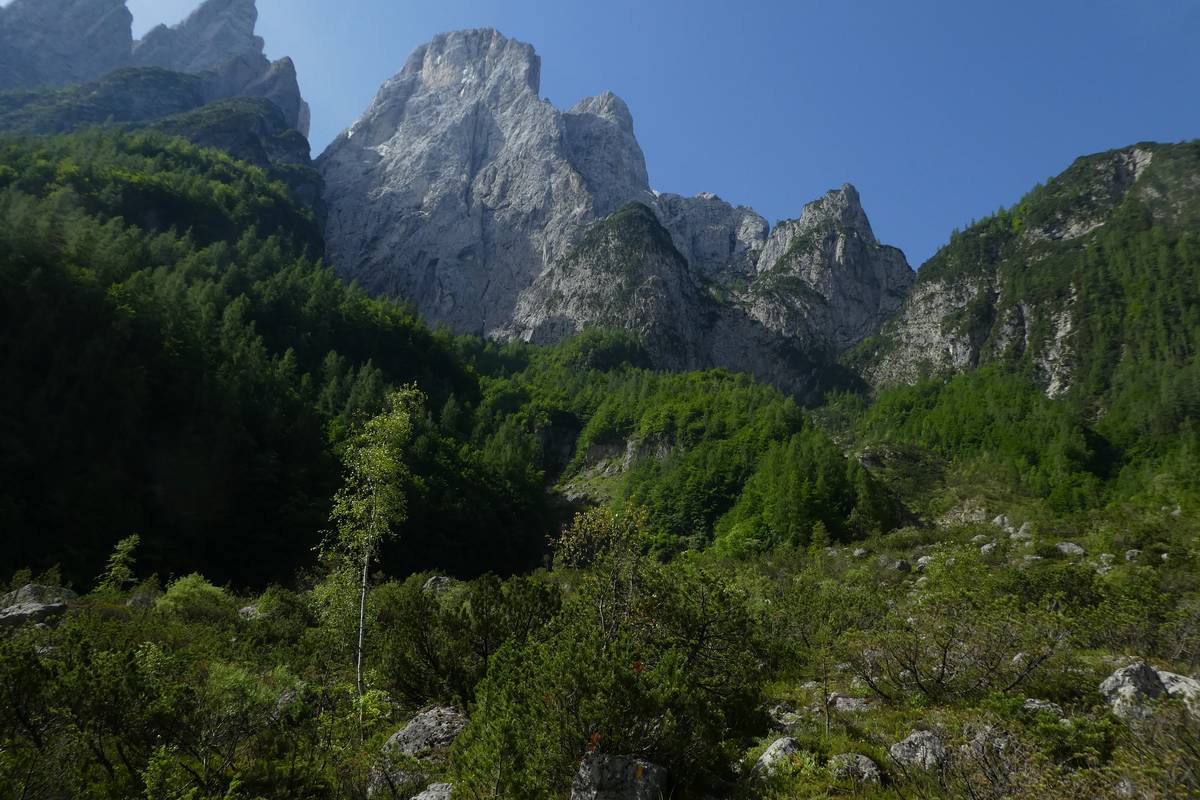 Agnèr's North Edge id part of the Schlern Formation; its base belongs to the Contrin Formation and is partially covered with vegetation. The passage between Schlern Dolomite and the Agordo Formation is visible foreground centre of the photo, upfront is the landslide debris with the winding trail (photo DG).