Despite its rudimentary equipment, the hut (1801 metres above sea level) can provide the visitor with sufficient shelter in case of need. In the surroundings of Casera Campigat (Sass Negher, Campo Boaro, Val delle Camorze, Coston della Vena) there emerge igneous rocks (pillow lava) allowing us to observe directly their coming into contact with dolomite rocks. This is an area that abounds in various minerals quartz, analcime, heulandite, chalcedony and even native copper. 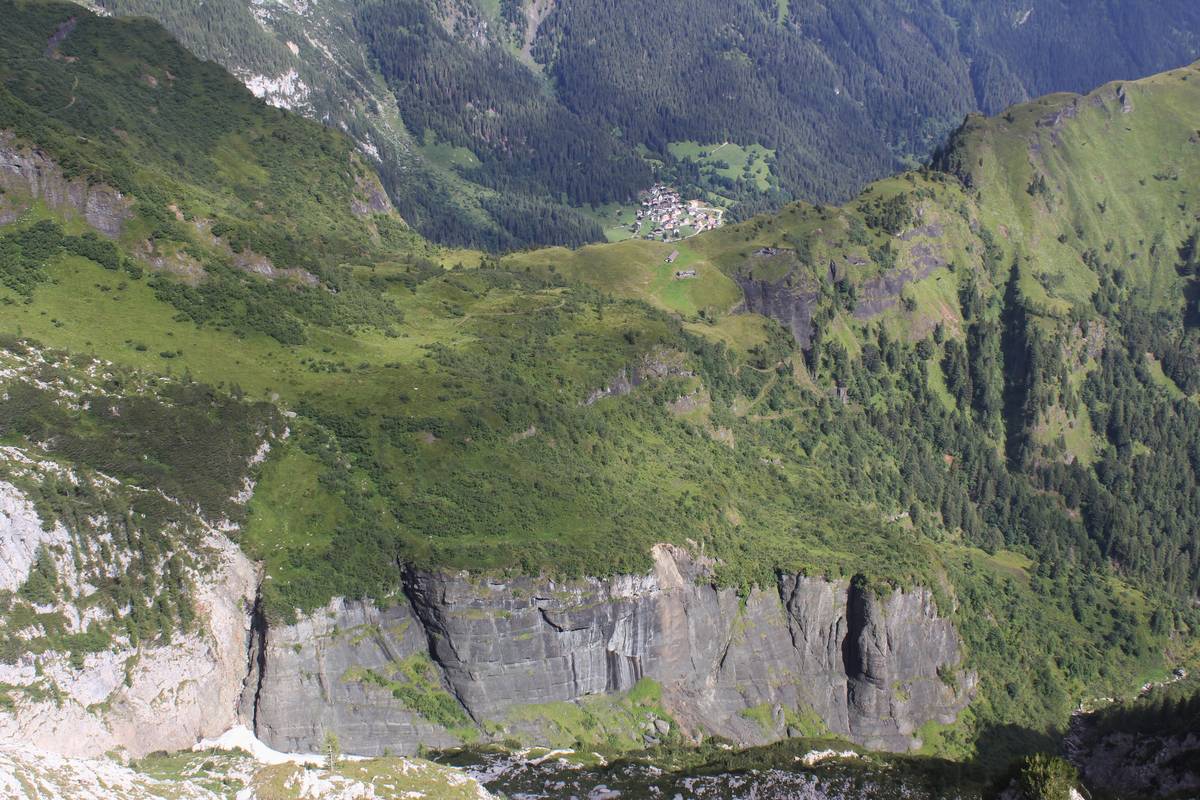 The Pass Cesurette and Casera Campigat, beyond the ridge the village of Garès appears; the twisting military road can be seen cresting towards the dairy; the path proceeds following the ridge to the right. In the foreground to the left can be identified the tectonic contact of the right transcurrent fault between the light-coloured rocks of the cliff escarpment and the dark-coloured reshaped pillow lava (photo Lucio D'Alberto).

The Marmolada-Monzoni area was affected by steady and significant important and persistent magma outpouring during the Late Ladinian. These lava spills led to the creation of a volcano, similar in size to that in Stromboli. Large amount of lava spilled over the seabed which, due of the high temperature amplitude between the water and the lava, solidified taking on the shape of a pillow (pillow lava). As  soon as the lava poured from the underwater slopes, the pillows rolled and reconsolidated further down, thus forming pillow-breccia.

From the Casera one has splendid view over the cliff escarpment of the Pale di San Lucano Group, covered by igneous rocks from Cima Pape. The development of the landscape was determined mainly by the lithology.  The Gardès Valley (Val di Gardès) is the dividing point of two completely different kinds of environment. To the south are the carbonate rocks of the escarpment cliff of the Pala Group, with its layers inclined at approx. 40° (clinostratifications); they are covered by scarce vegetation composed mainly of dwarf mountain pine. To the north are the profiles of the volcanic clastic rocks (Formazione della Fernazza, the Marmolada Conglomerate) and igneous rocks further down (basalts and monsonites). The latter are transformed in fertile soil which allows the cultivation of rich pastures and high-tree woodland. The environment of Pale di San Lucano-Cima Pape has inspired the great Austrian geologist E. Von Mojsisovics to coin the notion of “facies eteropy.” 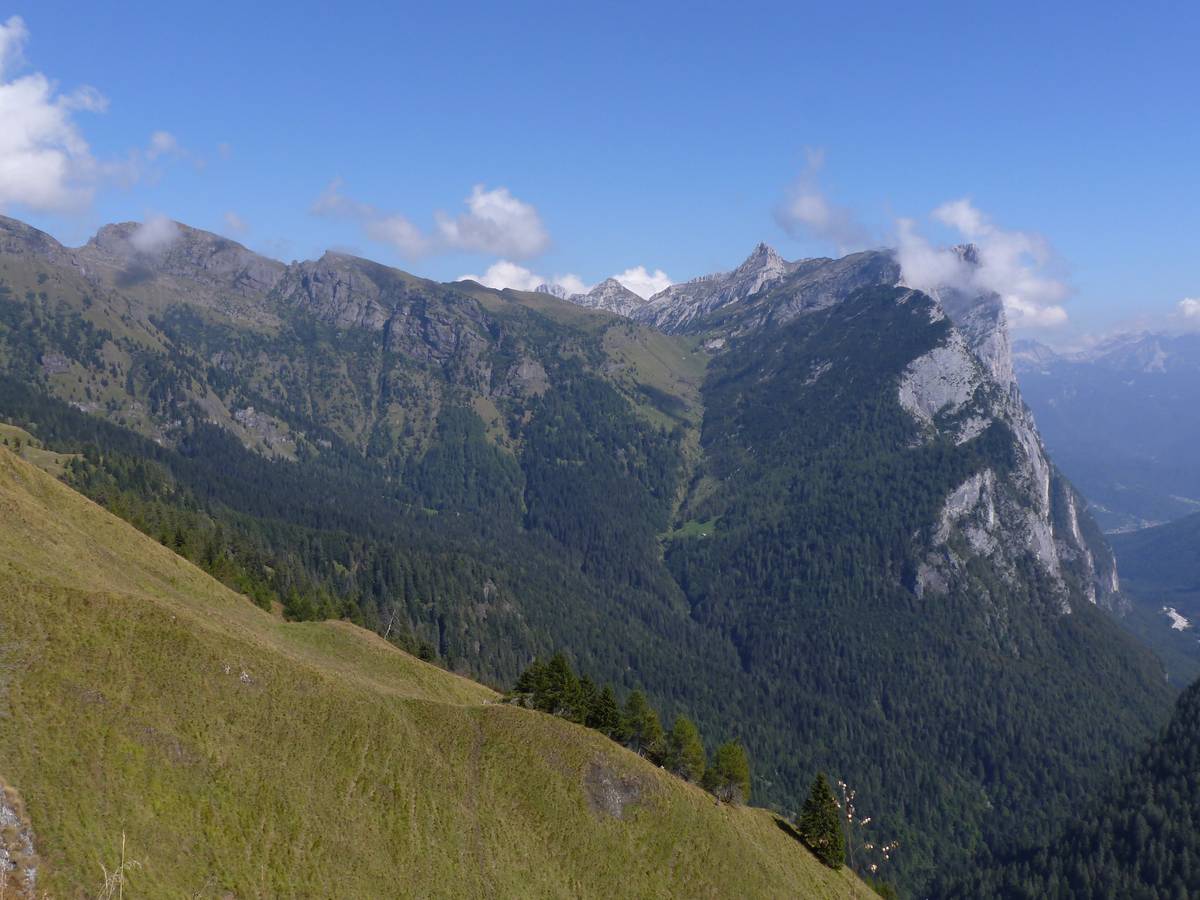 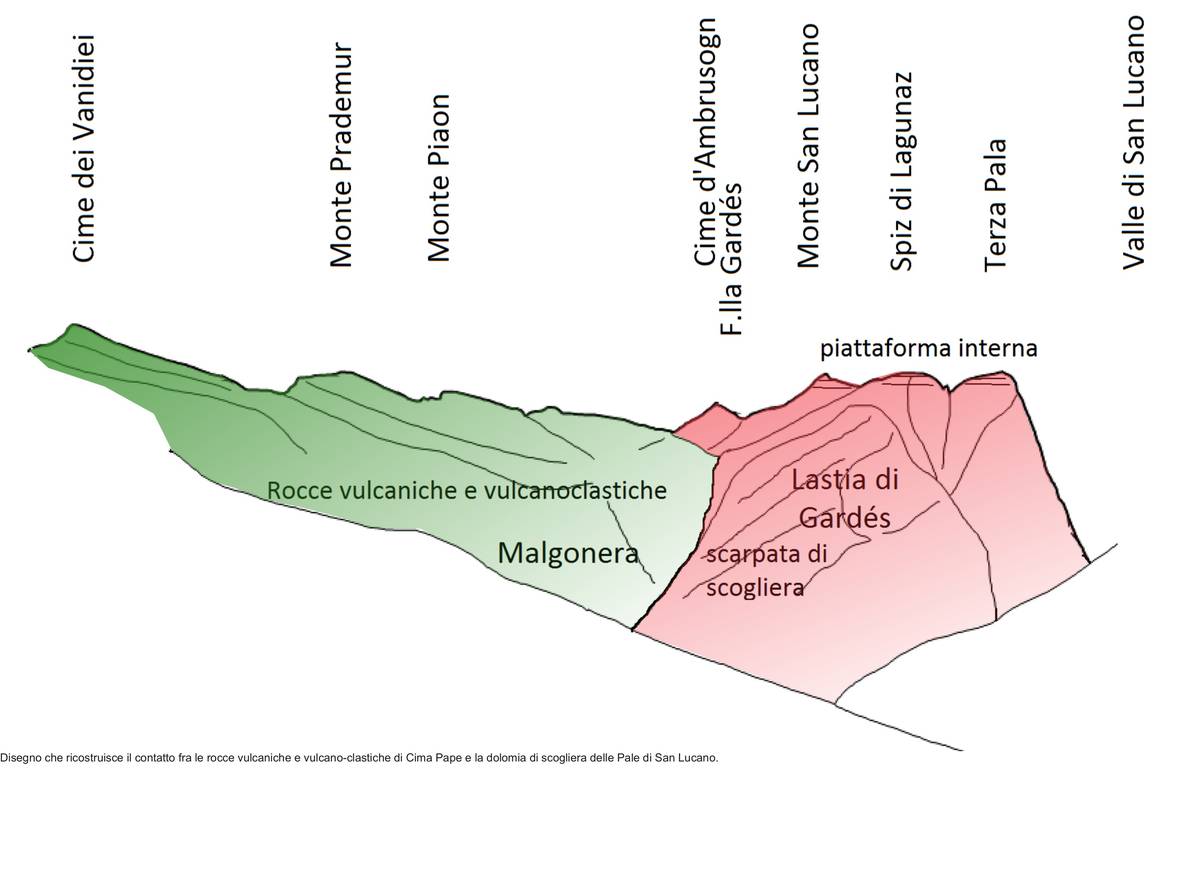 Geological sketch of the contact between the volcanic and volcanic-clastic rocks of Cima Pape and the cliff of Pale di San Lucano.

Pat Casera Campigat, the CAI path Nr. 759 continues uphill through volcanic rocks (reshaped pillow lavas) until it reaches the Valghere-Palalada ridge. While on the ridge, we are averted to the presence of the waterfall Cascata delle Comelle by the noise of the water gushing from the ravine bearing the same name; past several skips, the water flows through the ledge of the hanging glacier valley, carved in the Contrin Formation, and end up in the underlying Val Garés.

The village of Garés is located on an alluvial fan; to the north it is cordoned by the volcanic rocks of Cimon della Stia, followed abruptly by dolomite of the Focobon-Group characterised by jagged peaks, its slender rocky towers, and glacial cirques cupped in deep valleys dominated by vertical walls. The landscape is the result of selective erosion affecting fractured and tilted dolomite rocks crossed by magmatic veins. 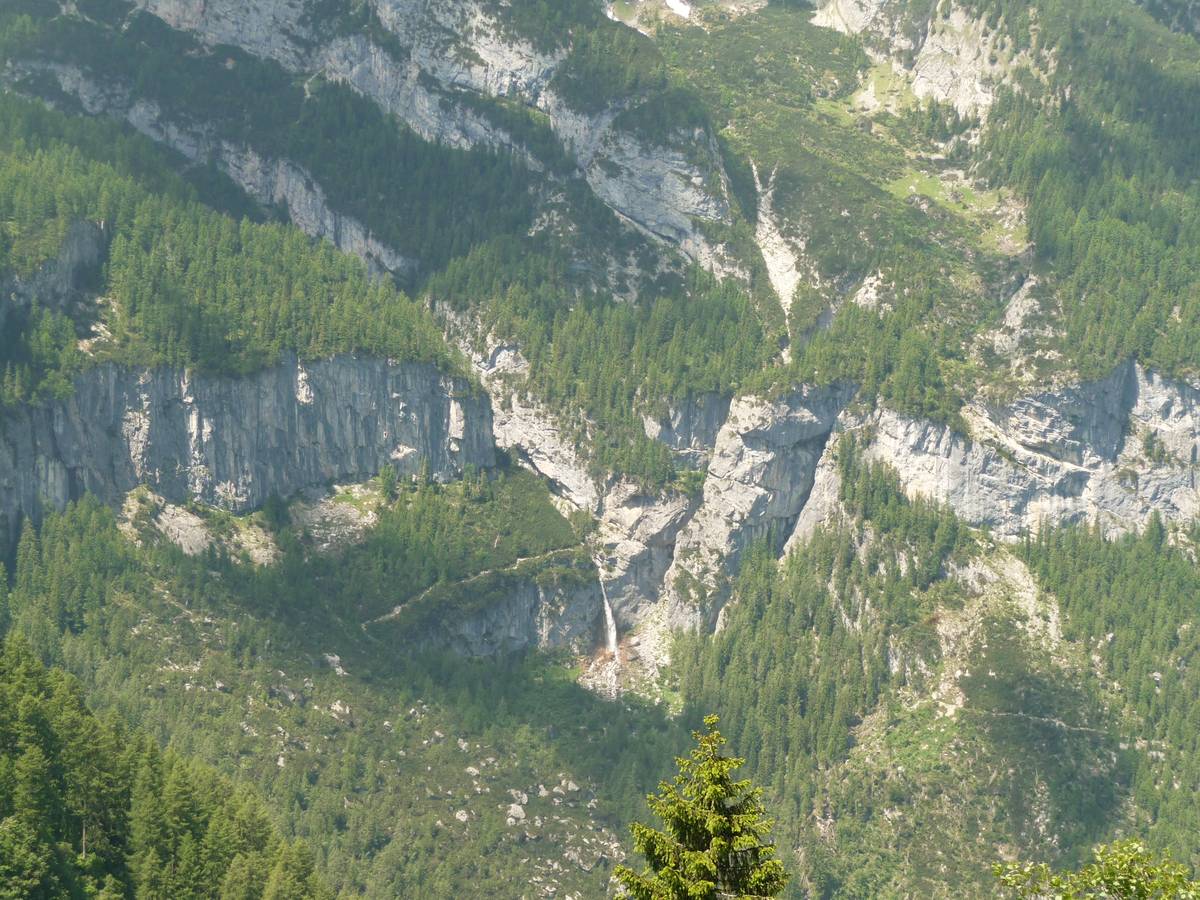 The Comelle waterfall skips over the hanging glacier valley step from the Contrin Formation, partly engraved by the narrow and deep gorge of the Orrido delle Comelle (Comelle ravine). The fissure is to the right of the waterfall and runs along a vertical andesite vein which was more prone to erosion than the surrounding dolomite. (photo DG). 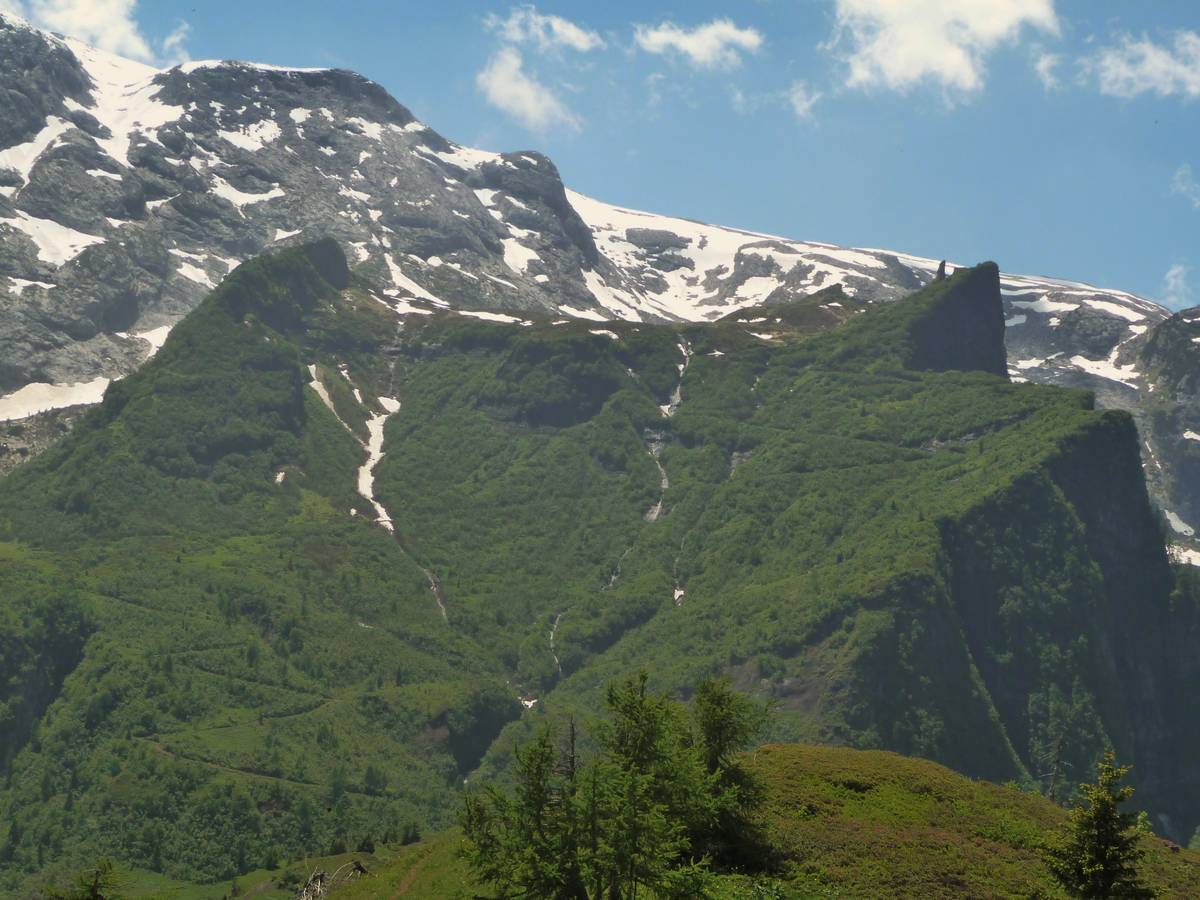 Sass Negher's volcanic rocks perched directly on the cliff escarpment of Pala-Group - the landscapes may be close to each other, nevertheless entirely different. A visible track of the military road climbing towards Campo Boaro (photo DG). 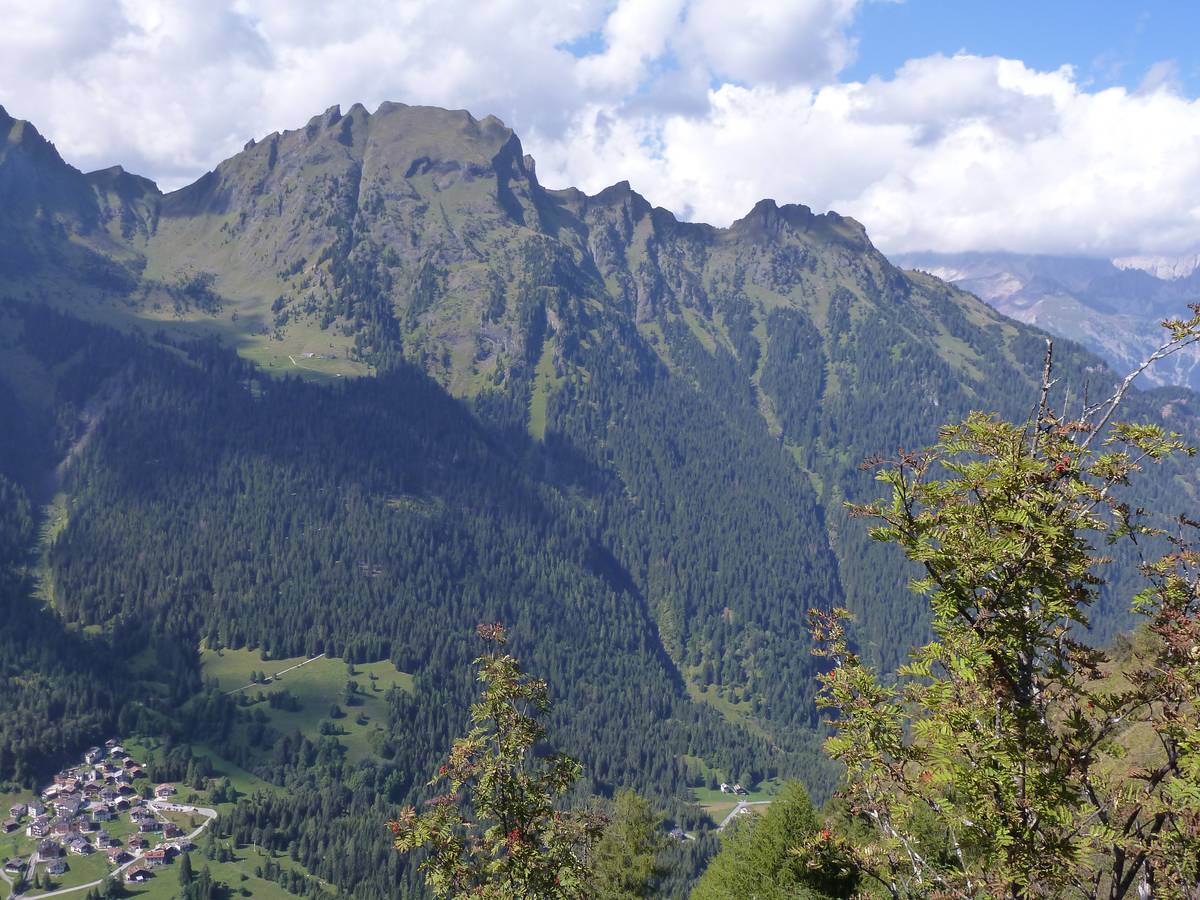 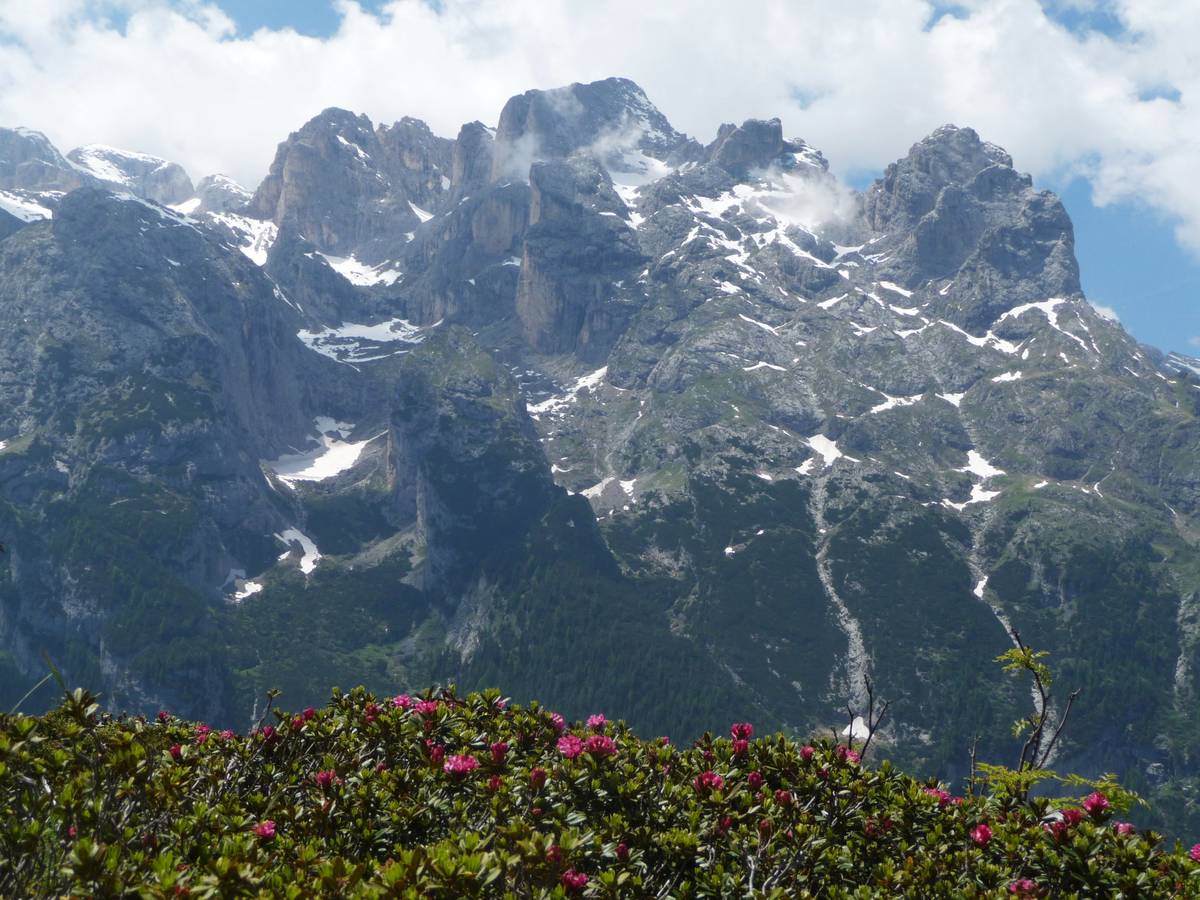 Panoramic view towards the Focobon-Group; from left to bottom: Bureloni and Cima di Valgrande, followed by the elaborate Cima di Focobon - the most compact summit of Campido, Torri della 64a Compagnia (barely visible), Cima Zopel and Cima Lastei. Further on the left: Sasso Tedesco separated from Val di Col by the isolated ridge of Drioparei (Cima delle Scalette). There are three overlapping hanging glacier cirques in Val di Col.

The dark mass that is Sass Negher with its odd summit tip appears nearby; further away the volcanic rocks of Campo Boaro that covering the escarpment of Pale del Balcon.

The Pape subgroup stands out not only with its typical colour, but also because of the forms inherent of selective erosion, such as the step-like slopes with alternating ledges of  soft rock and rocky walls of hard rock. The monocline relief, or cuesta, of Lastei di Pape features a surface carved in the hard layers of the Marmolada Conglomerate.

The path continues going up and down over volcanic rocks, where the visitor can come across minerals, such as heulandite; with its red-orange colouring, the mineral stands out from the incasing greenish rock. Ice-contact terraces, also known as Kame, can be found at an altitude of approx. 1800 metres; other sub-horizontal features form due to structural surfaces at various altitudes. Path Nr. 759 proceeds with gentle ups and downs and reaches the saddle pass Caoz at 1944 metres above sea level; it then descends to the recently renovated Casera ai Doff (1878 metres above sea level), which is an excellent spot for refreshment. 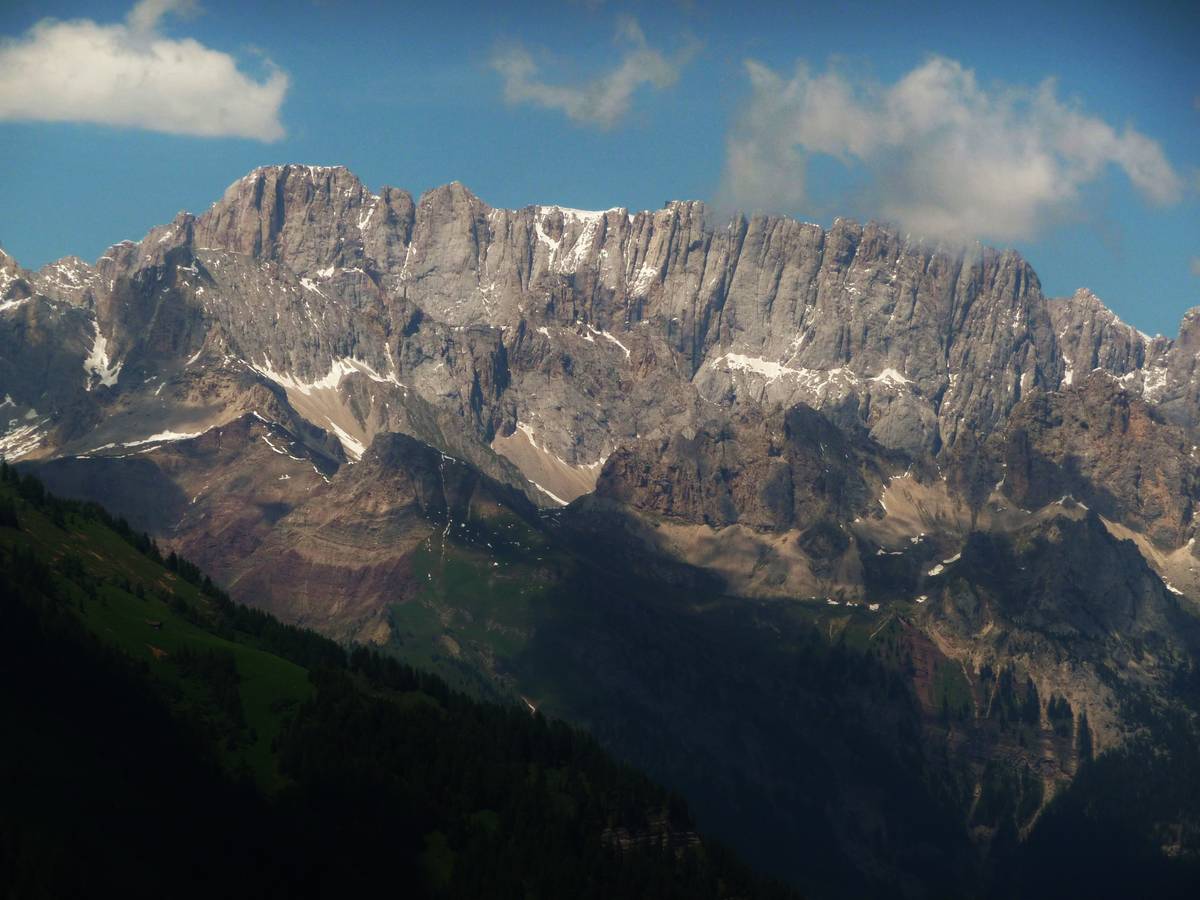 The south wall of Marmolada, also known as the “silver wall”, with Monte La Banca, Monte Fop and Cime dell'Auta in the foreground from left to right. Marmolada, the Queen of the Dolomites, differs from the rest of the Dolomites in its limestone composition. The lack of dolomitisation of the Marmolada platform as well as the adjacent Costabella-Cime dell'Auta, can be put down to the absence of contact with sea water, as Marmolada was submerged in its entirety in watertight volcanic rocks throughout the Late Ladinian. Marmolada Limestone (now Schlern Formation) has weathered with time; the massive areas alternate with vertical fractures that create jagged peaks at the top. The thus created landscape is similar in some ways to the granite of Val Masino-Bregaglia and on Mont Blanc. 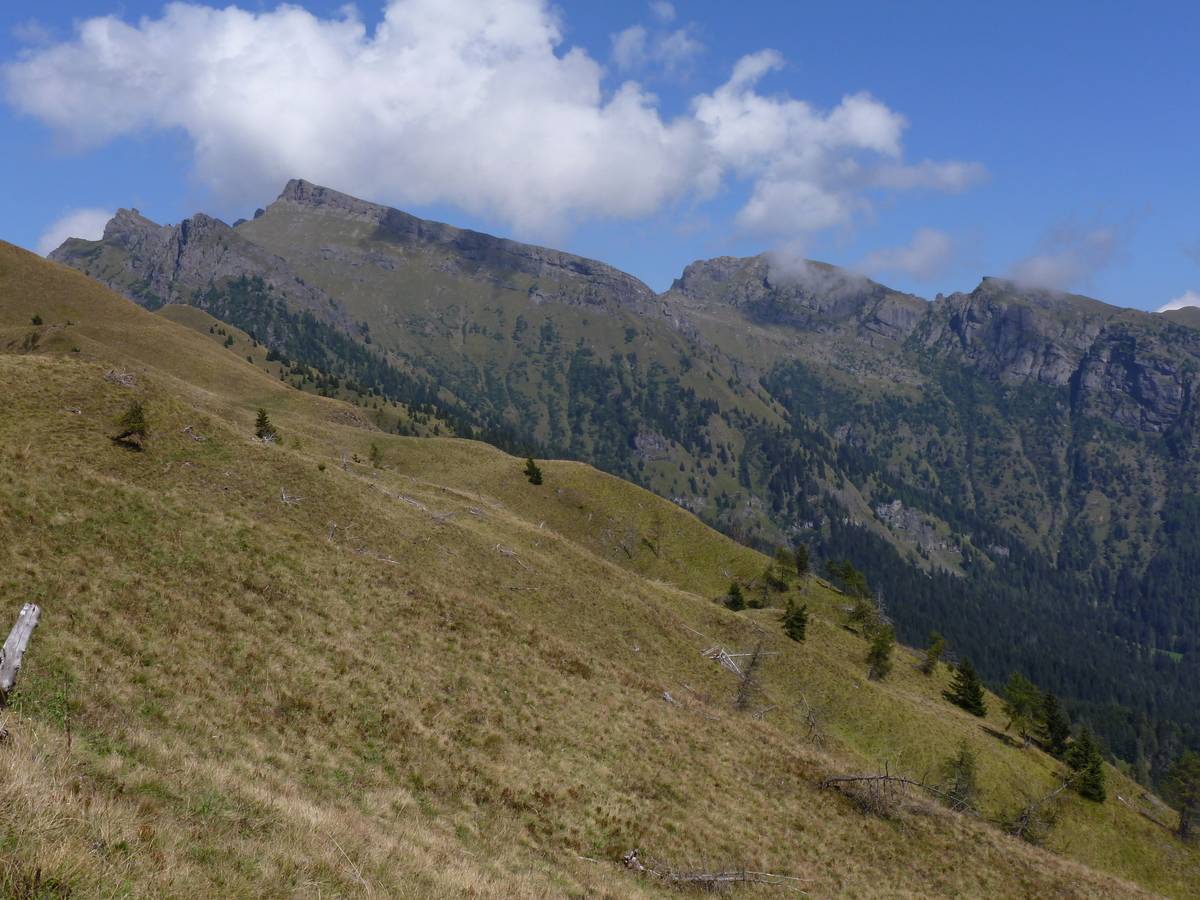 A view towards the Cima Pape-Group with the monocline - cuesta - relief of Lastei di Pape; this typical landform goes back to the process of morphological selection, whereby the substantial pack of layers of the Marmolada Conglomerate shields the most erodible underlying rocks like the Monte Fernazza Formation (photo DG). 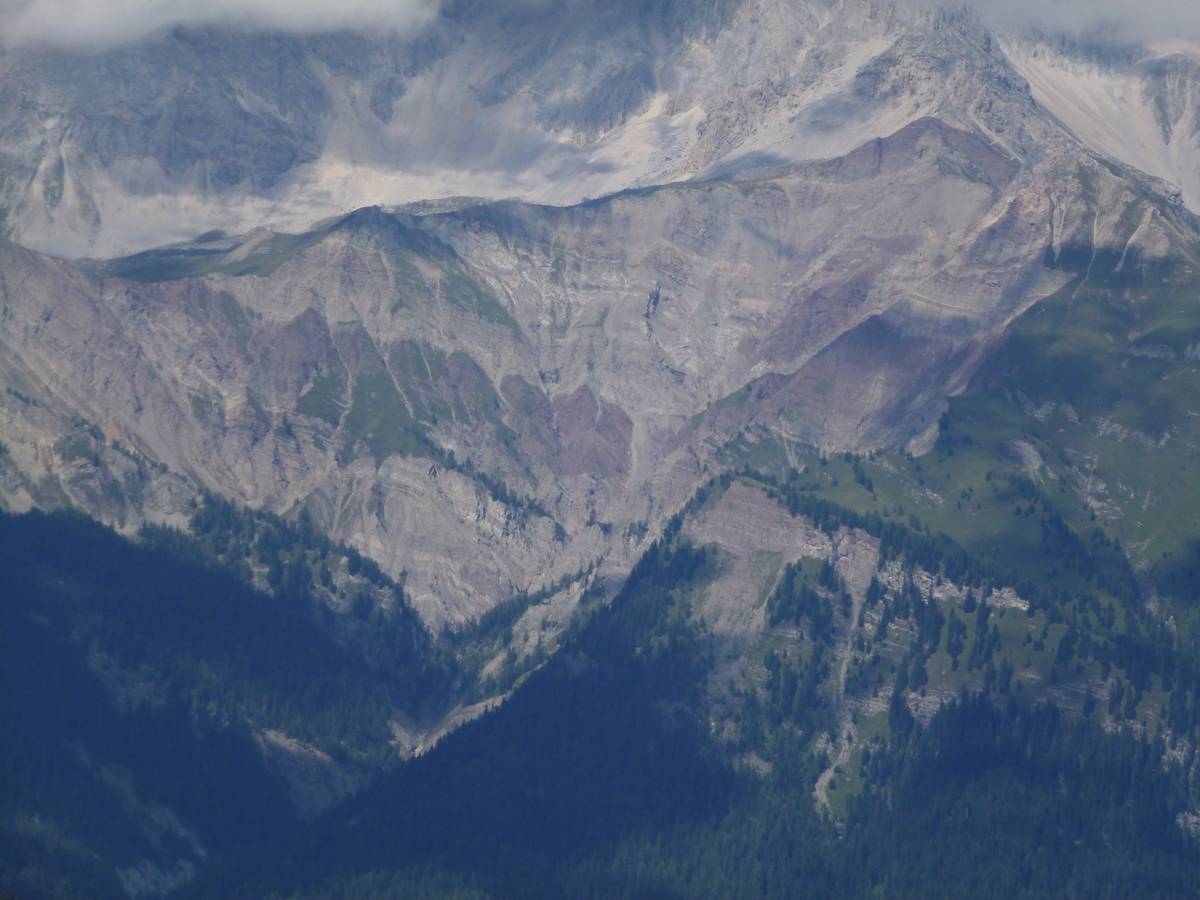 The huge gully of Marmolada represents the largest erosion area of the Dolomites; it is carved into the layers of Arenaria di Val Gardena, Bellerophon Formation and Werfen Formation. These "gully-like" forms are produced in a process comprising several steps. In the beginning heavy rainfall and hail washed away more erodible material, such as silt and clay, while at the same time rain caused granules to be swept down the slope more effectively by creating a strong runoff. Water's erosive capacity grows when it accumulates in rivulets, ballast and debris. Larger and deeper furrows are formed by the rivulets, thus accelerating the erosive power, which in turn leads to the creation of even deeper valleys. This process results in the increase of the debris flow in terms of stream capacity of the river Gavon Torrent (photo DG). 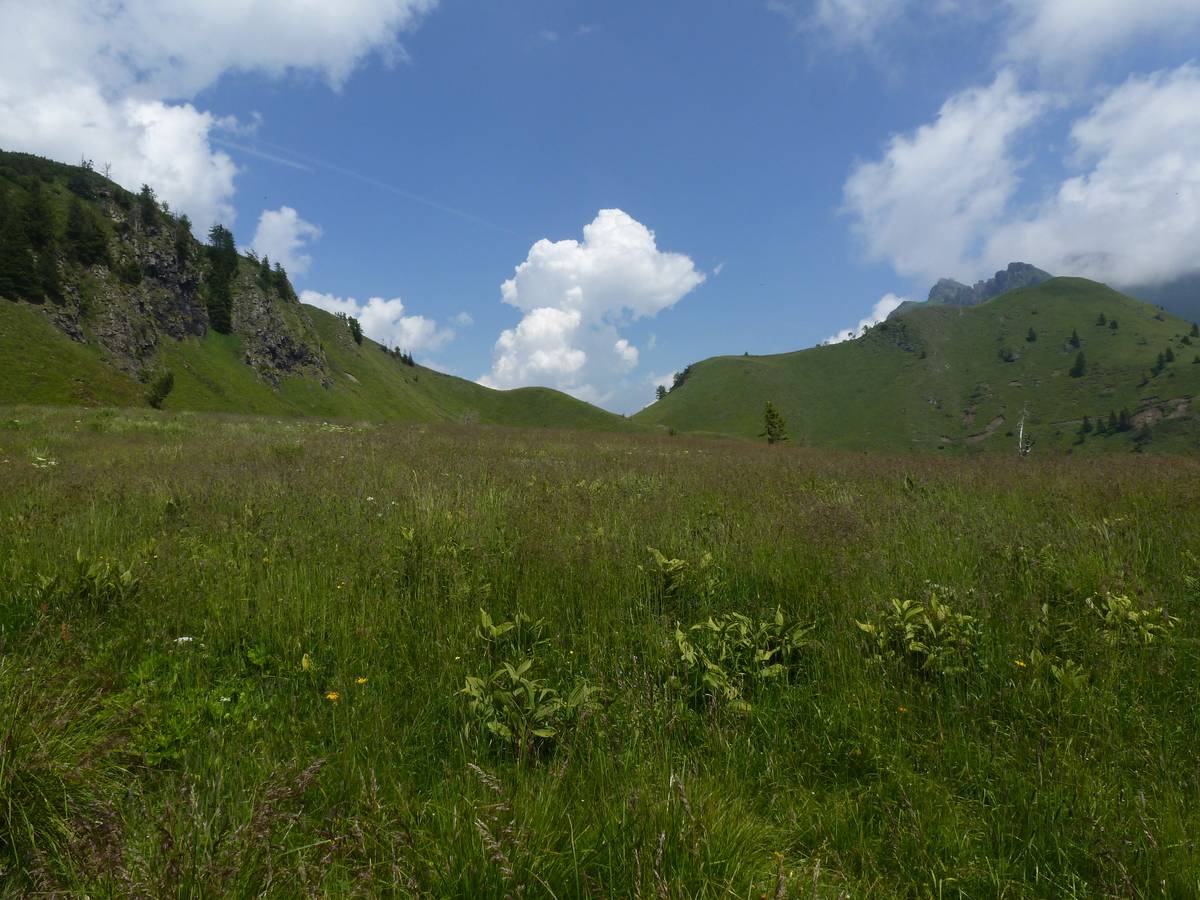 The southern slope of Monte Palalada is interrupted by a sloping terrace; it is believed that this structural surface was caused by the presence of currently eroded soft rocks, which covered a layer of hard rocks (photo DG).