The CAI path Nr. 762 descends from Malgonera towards Pont crossing what used to be the state-owned forest of Malgonera prior to the storm Vaia, and cuts through Val Grande. Val Grande offers the possibility to discover quite rare intrusive igneous rocks, such as pyroxenite, gabbro, monzonite and syenite.  Pyroxenite is a dark-coloured rock that is very poor in silica (ultrabasic rocks), and is mainly composed of black prismatic augite pyroxenite (black prismatic) and tiny green olivine crystals. Gabbro composed in similar quantities of prismatic augite pyroxenite (black prismatic) and plagioclase with light grey in colour and glassy appearance. 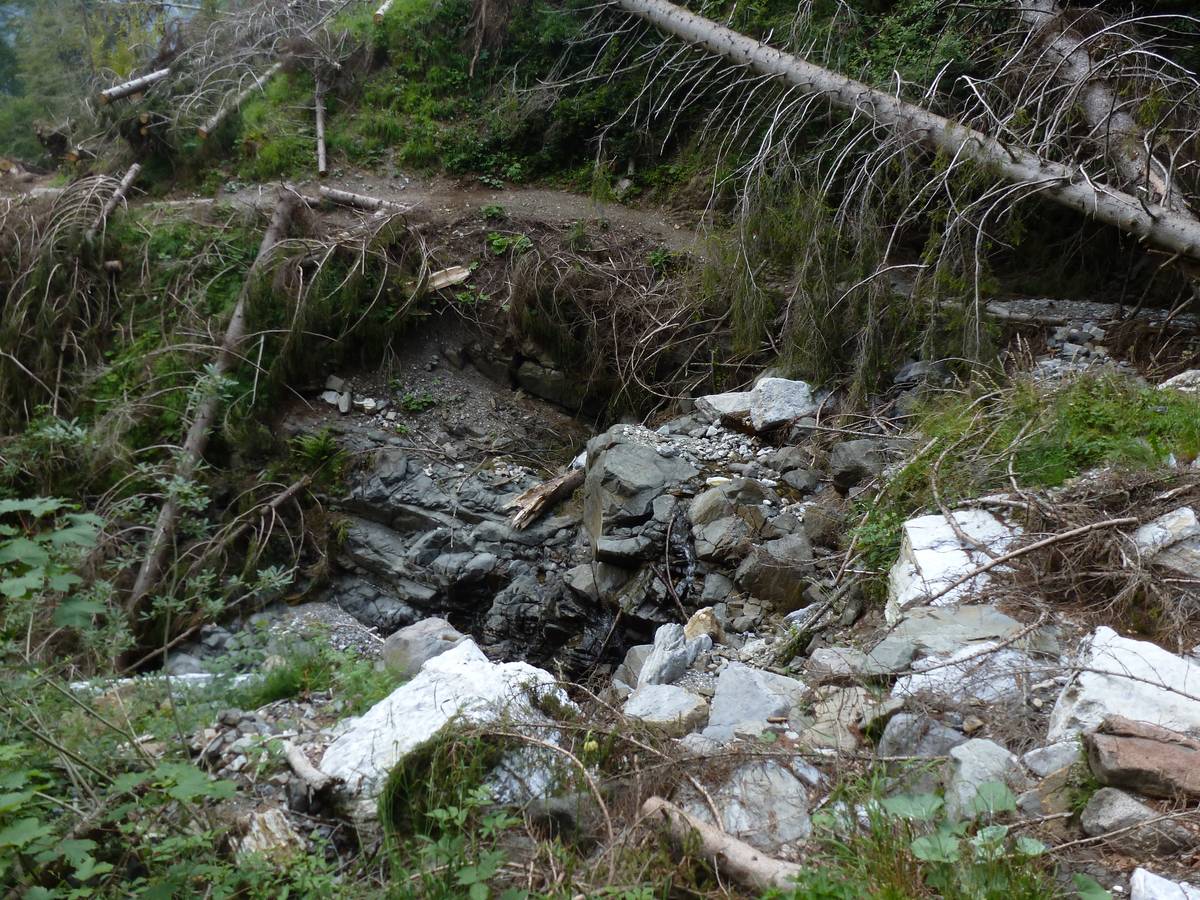 Monzonite was studied for the very first time in the Dolomites, strictly speaking, in the Monzoni Mountains, after which it was named. Even though the Monzoni Mountains are an unassuming mountain group which goes largely unnoticed in the Dolomites, they too have left their mark the world of geology, thanks to the renowned French geologist Albert De Lapparent. De Lapparent devoted his studies to the geology of the Monzoni Mountains, which was published in the Annales des Mines of 1864. He coined the term "monzonite" to define the most abundant rock on this mountain; an intrusive rock of granular structure, composed of crystals with similar dimensions. In defending order, it is composed of potassium feldspar and plagioclase (light-coloured minerals, making up  more than 70% of the rock), hornblende, augite and biotite (dark minerals, with a proportion of 20%), and quartz (less than 5%). All intrusive rocks with this composition have been defined as monzonites from then on.

Syenite is usually dark rosa; given the substantial prevalence of potassium feldspar (orthoclase), it may contain black-greenish hornblende crystals.

It is a small miracle that such a great lithological variety can be concentrated on an area this small. These outcropping rocks belong to a small lens-shaped igneous intrusion also known as laccolith, which has intruded the shallow rocks. The andesitic and basaltic magma came from the same reservoir that gave rise to the Marmolada-Monzoni volcano. The magmatic melt underwent a differentiation process due to the combined action of cooling and gravity. Unlike the solidification process of minerals which takes place at a certain temperature, magma solidifies over the range of several hundred degrees. The first to crystallise are minerals characterised by high melting temperatures and then, step by step, all the rest as the temperature lowers. Olivine and pyroxene, also called mafic minerals because they are rich in iron and magnesium but poor in silica, are the first to crystallise. Since they are heavier than the magma from which they originate, they tend to seep through the fluid, and accumulate at the base of the magma chamber after which pyroxenites are formed. The remaining magma becomes relatively richer in silica than in its original state - as a matter of fact, the crystallisation of olivine and pyroxene would diminish the high iron and magnesium proportion and leave a tiny part of silica. As the temperature continues to drop, plagioclase begins to solidify alongside the mafic minerals (this is how gabbro is created), then hornblende with the solidification of the monzonites. The crystallisation of light-coloured rocks, such as syenite occurs right at the end, when mafic minerals are almost absent. Syenite has a high composition of minerals rich in silica, such as potassium feldspar, plagioclase, quartz and with few mafic minerals (hornblende and biotite).